I've had the idea for this for a while, to do a window scene.  Originally I had the oval scene without the blue frame, but it looked odd, so I added it.

I used a acetate cover to make the oval window, and sponged green ink down 3 times, moving acetate and paper covers so the grass is darker further away.  It occurred to me when I was done sponging the green that if I wanted a winter scene I should have used blue/grey instead.  Ah well, it's an Ontario winter, where there's still green grass under the snow. :P

I stamped the tree and deer and some white snowflakes (which I should have embossed), then inked a bit of blue around the top of the oval so there was a bit of definition to the edge of the oval.  As mentioned above, the frame was added at the end, which meant I had to rip off some of the embellishments and reglue them on.  Namely the wire tree from my Um Wow Studio kit and one of the 3 roses (which, I'm proud to say, I made myself).  Had I added the frame first I'd have put the flowers around it, rather than having them make a line to the side.  They were supposed to balance the tree, but the frame makes them look out of place.

The flowers were my first attempts with the Spellbinders rose creations dies.  I'm very happy with how they turned out.  I used 2 layers for the smallest flower (almost a bud), three for the opposite one and 4 for the one in the center.

For the ribbon, I tied it using a template I made based on the instructions from this blog post by Becky Gerrison.  It worked beautifully, and took less time than usual, as I wasn't fussing with the bows and trying not to waste ribbon (by having my ends too long and cutting the excess).

I used liquid applique last to make some puffy snow on the scene. 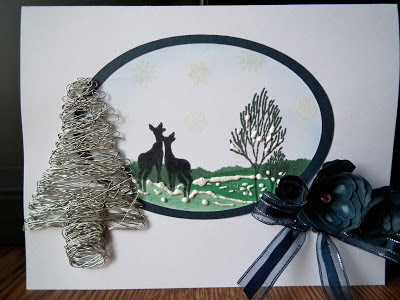 Posted by Jessica Strider at 8:00 AM