I've been very lucky this holiday season, as I found myself winning several contests I entered.  One of them, via Papercrafts Connection, was for the following stamp set by Cas-ual Fridays, named Countdown. 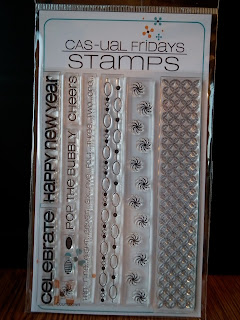 My first thought on seeing the countdown wasn't for New Year's, but for a rocket ship (I think my love of SF is showing).

But I wasn't thinking of just any rocket ship card, I was thinking of an interactive one.  I cut the penny slider track freehand with a craft knife and used several pop dots and some cardboard to make the slider.  I stamped the rocket ship on white cardstock and coloured it with Crayola markers before fussy cutting it out.

For the background, I added stars and a planet from my space set and a galaxy from the Countdown set and coloured those in with markers too.  Then I stamped the countdown  At this point I realized I should have used dark paper for my background as my space was white.  So, I inked the paper with dark blue memento ink, staying away from the coloured areas so I wouldn't ruin those.

Originally I'd made the card so the slider didn't have a backing, but it was harder to use than I expected, so added the black backing after the fact, being very careful where I put the pop dots so as to not interfere with the slider. 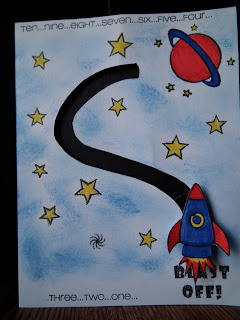 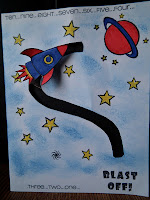 Supplies:
Cardstock: Recollections, thin cardboard
Stamps: Cas-ual Friday - Countdown, ? space set (alas I threw away the packaging for that set so I don't know what it's called or who it's by)
Crayola Markers
Memento Ink
pop dots
Posted by Jessica Strider at 10:32 AM