I patterned this card off of one by Jennifer McGuire (click here to see my pin of it) back when Simon Says Stamp released the Delicate Dahlia die I used.  Jennifer did two things on her card, 1) she cut out some of the flowers using the die, coloured them and reapplied them on the page and 2) she used the die as an embossing plate.

It's the second technique I tried here, but either my paper was too thin or my sandwich was too thick, as in a few places the die cut into the cardstock, tearing it.  Once I'd coloured over the medallions with markers you couldn't see it as much, but I'll probably experiment with that some more.  I must admit, my colouring job was very fast, which shows in my going outside the lines in a few places on the blossoms.

The sentiment is from the Fiskar's Laugh Sentiments set, inked with the same markers I used for the flowers, a mix of Crayolas and Stampin' Up markers.

I wonder if I should add rhinestones to the centers... 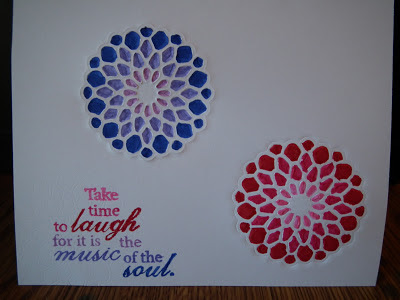 Posted by Jessica Strider at 1:54 PM