Today's card is similar to yesterday's in that I stamped Stampscapes onto glossy cardstock.  I used a piece of scrap paper to mask off the hill so I could ink in some light blue to make a snow bank.  I didn't think to add the snowman right away or I would have done that first and masked it.  Ah well.  I added a bit of liquid applique, let it dry and then used my heat gun on it to make puffy snow.  I also inked in some snowy clouds in the sky.

Once again I scored the cardstock base above and below the panel.  I lightly inked my die cut tag and then stamped the sentiment.

I wanted an accent and so made a metal wire tree, which I attached using hot glue. 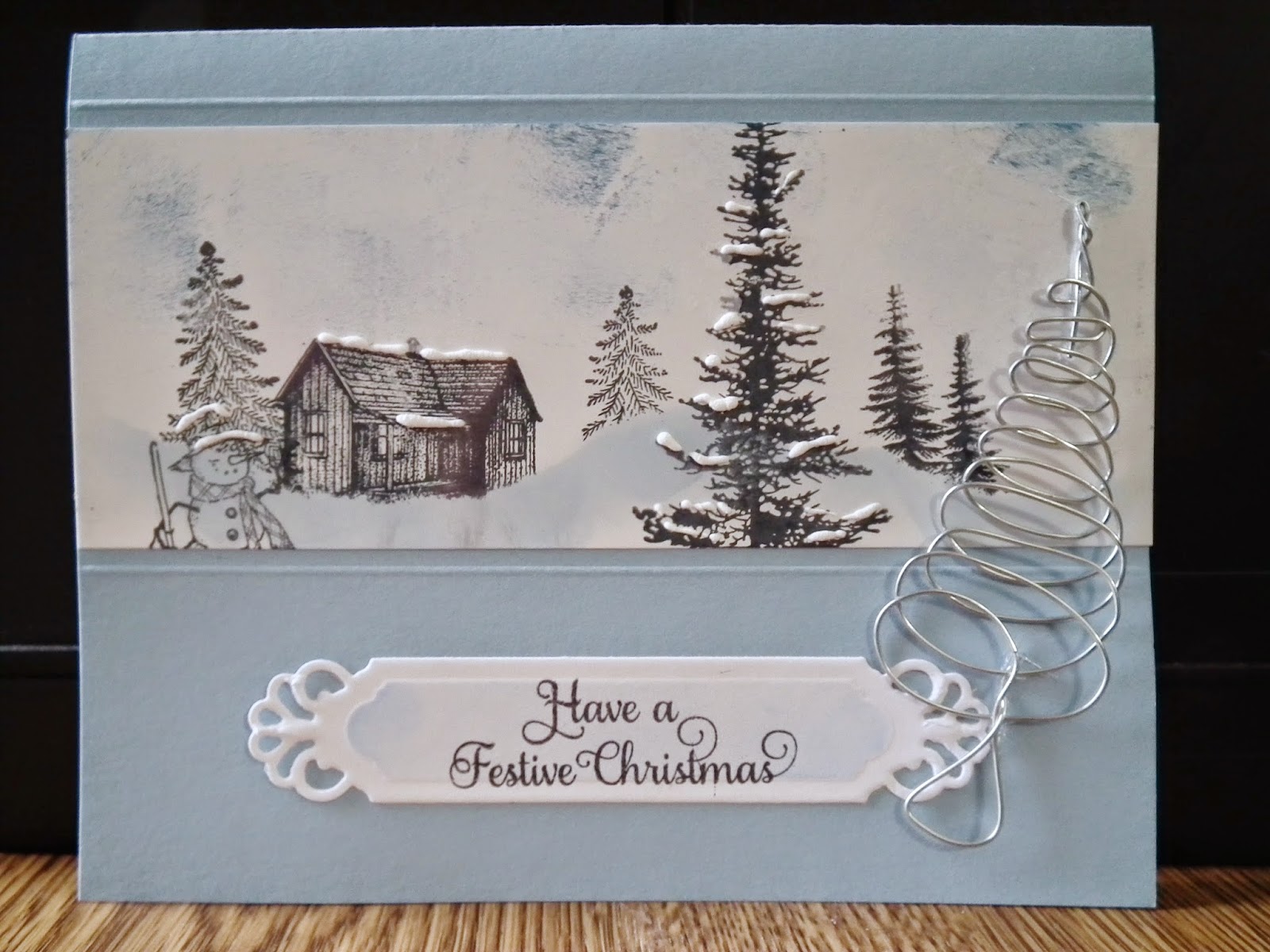 Posted by Jessica Strider at 9:30 AM 2 comments:

Santa Flying Over the Mountains Card

I started this card by stamping the mountains and trees using Stampscapes stamps on glossy paper.  The santa stamp went next.  It's a wooden stamp with one reindeer, so I carefully lined up my stamp and only inked the deer to get the extras.  I inked the card using a mixture of greens and black blended in at the edges.

I originally had it mounted on a plain dark yellow base, but I didn't like the yellow, so I blended some gold and dark yellow gelatos into the paper.  I scored it above and below the green panel and die cut a label and stamped my sentiment on it. 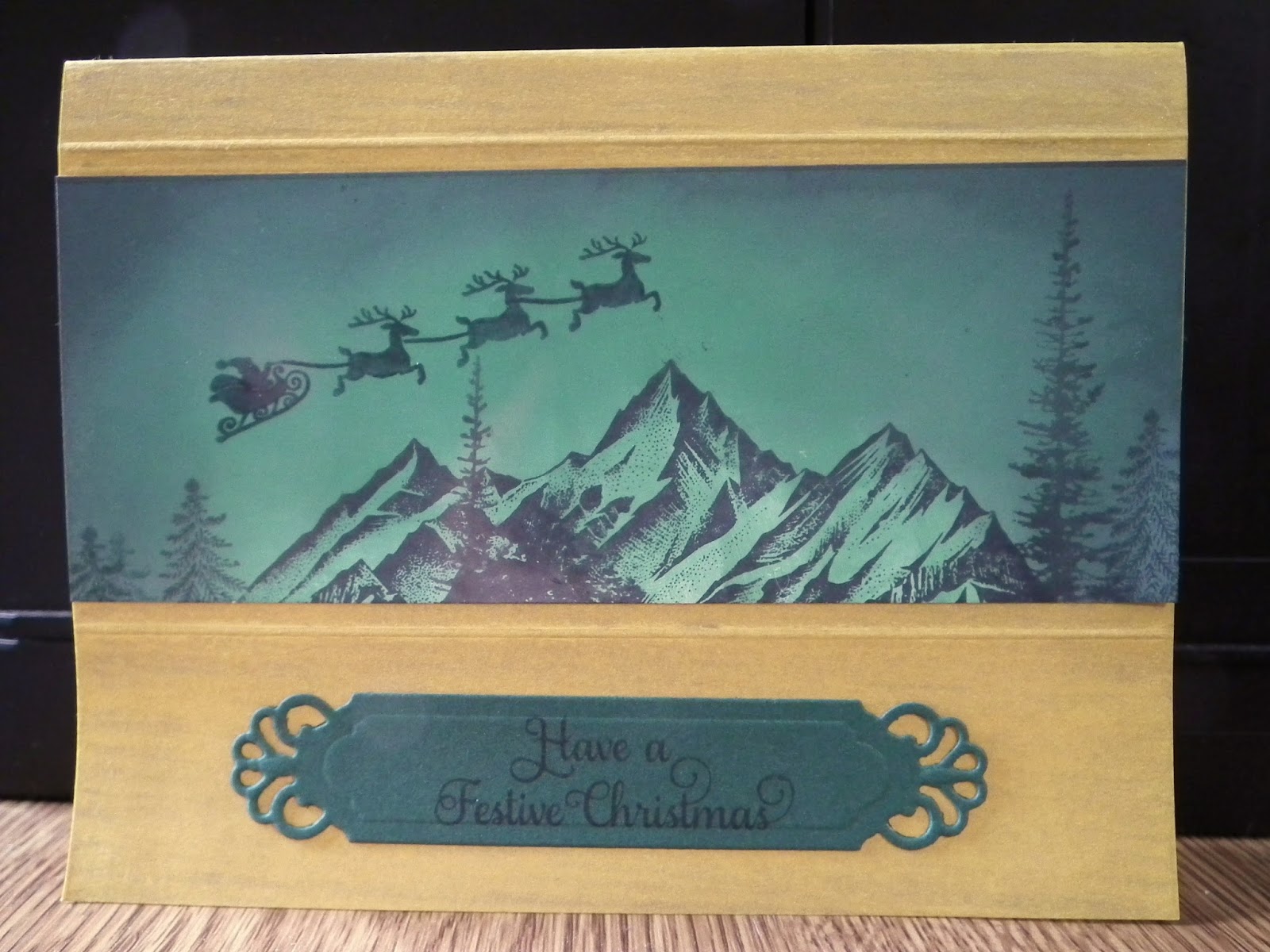 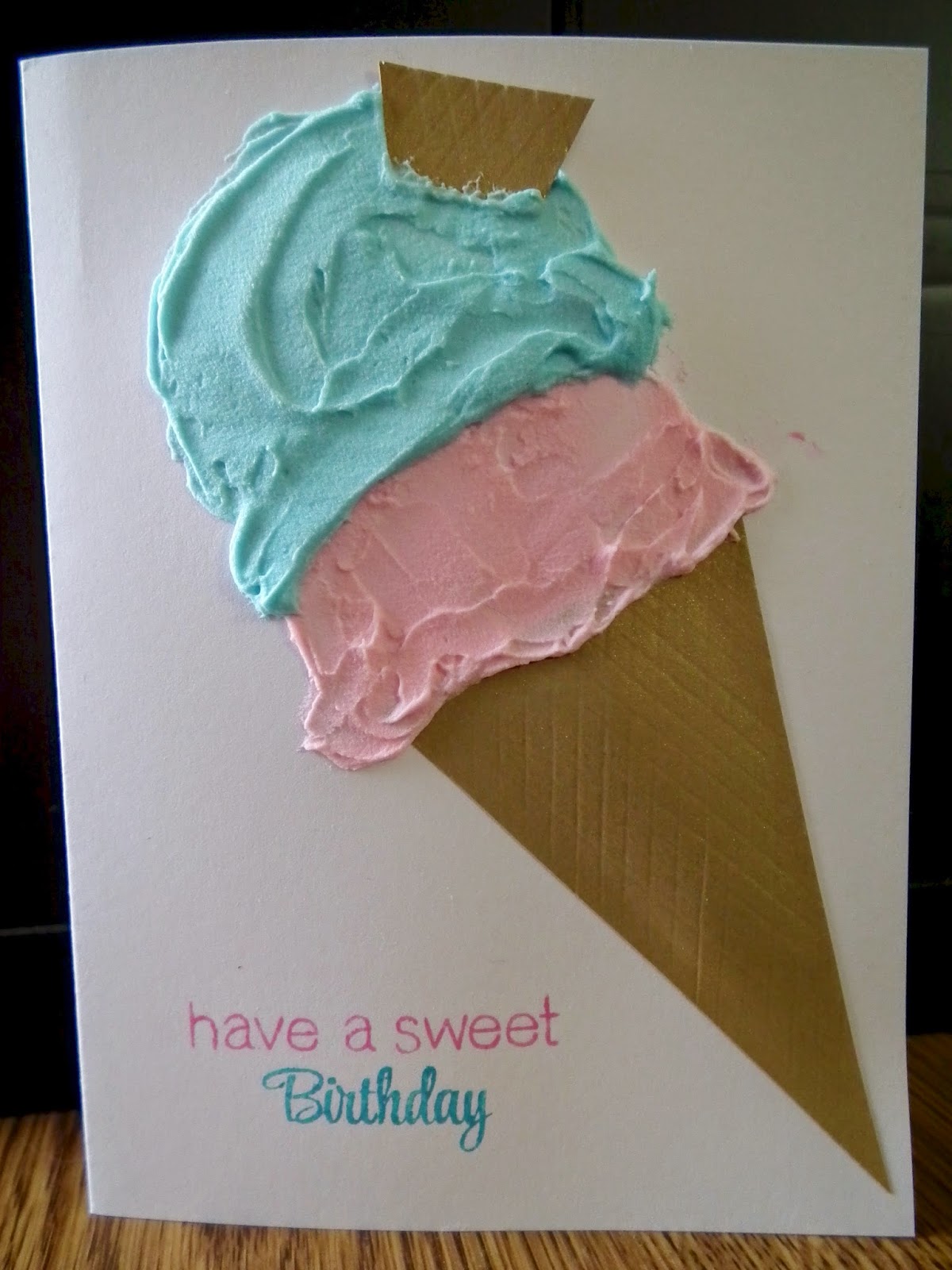 Since I posted a space card yesterday I figured I'd post another one today.  I made this card for a science fiction fan I know using Stampscape stamps and techniques.

I used a piece of glossy cardstock to stamp on, so I could blend the different inks.  I started off by stamping the astronaut, then I masked an area off to be the planet and stamped the satellite (so part of it would be behind the planet, making it look further away.

I stamped the astronaut and satellite again on scrap paper, which I fussy cut out and sprayed with repositional adhesive so I could use them as masks.

With the figures masked, I masked off the sky and started inking the planet using different shades of red and black.  I used a marker for the black spot.  I then masked the planet and sun and inked in my background space in shades of blue with black at the edges.

After removing the masks, I inked the sun and gave it an aura of yellow glitter glue and added some grey marker to the satellite and astronaut.  I then stamped in some meteorites to show that space isn't empty.

I mounted the card on black cardstock and added 2 mini spaceships die cut out of metallic cardstock. 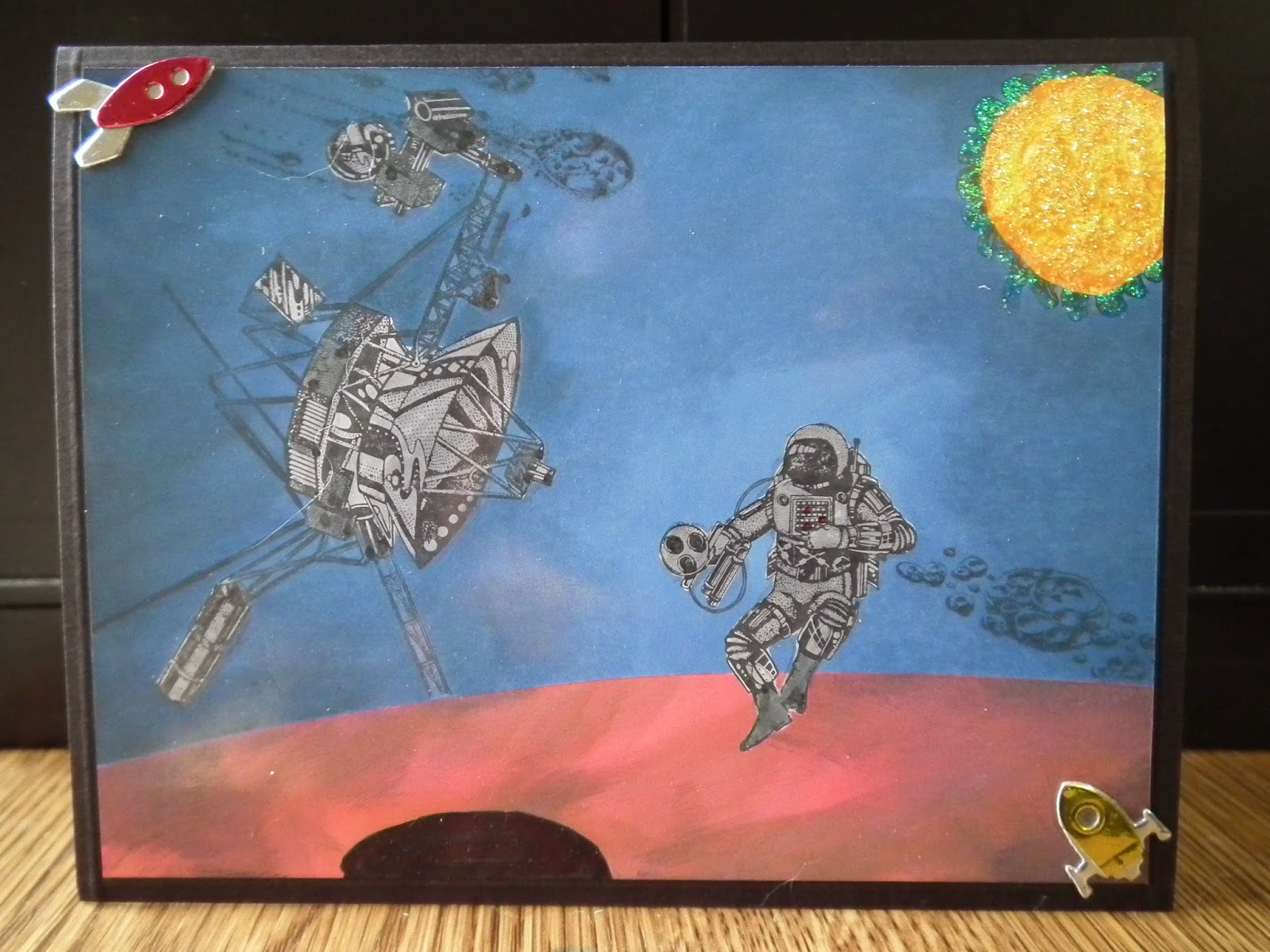 May Your Holidays be Out of This World

I've got a rather unorthodox Christmas card today.  Using markers I coloured the Lil Lads and Lasses image, Futuristic Willow, that I'd printed and cut out with my Silhouette, in holiday colours and then had to fit a card around it.  I thought of the sentiment and the rest flowed from there.

I cut a panel out of black cardstock and punched a bunch of stars out of it.  I layered that on a piece of neon yellow cardstock, which in tern was glued to a black cardstock base.  The sentiment was written on a piece of red scrap paper in metallic gel pen (and finishes inside on a second banner).  I die cut a circle out of gold cardstock and rubbed some red ink on it to make it look more shadowed, then die cut the red and green spaceship.  I attached all the pieces and voila, a space themed Christmas card. 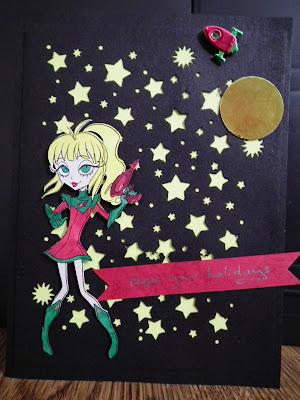 This is a card that was pretty easy to make.  I cut the candles out of cream cardstock on my Silhouette and lightly inked the edges of the dripping wax so they'd stand out a bit.  I punched a ton of branches out of green cardstock to stand the candles on, and embossed a piece of red cardstock with a music notation folder.  I glued the layers on and added the yellow cardstock flames (with some orange ink added) to finish it off. 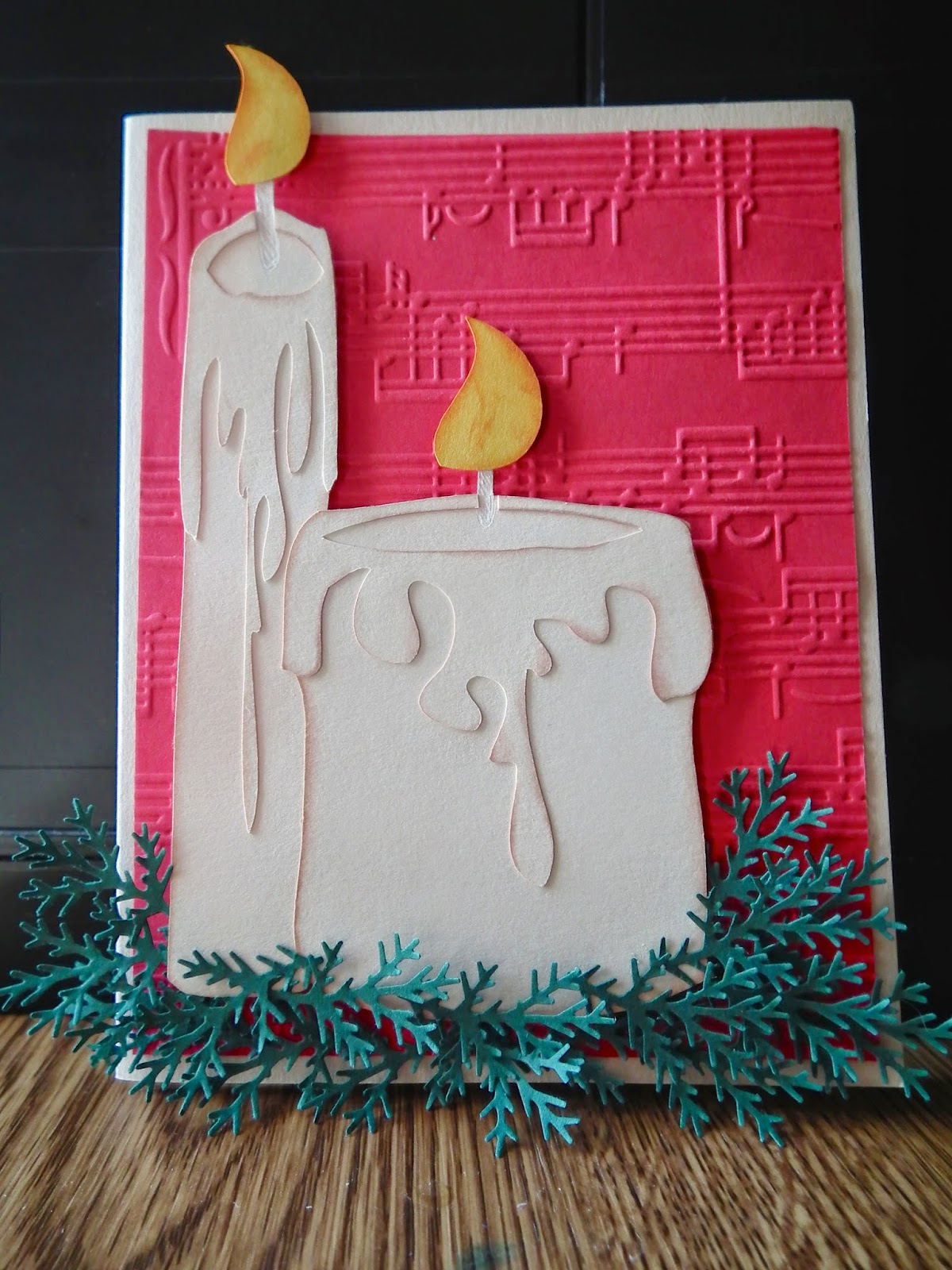 This is a similar card to one I posted a while back, only with a different colour scheme and some other minor changes.  I embossed a piece of dark blue cardstock and stamped Happy Holidays in white ink pigment on it.  The stamp is a digital image (Lil Lads and Lasses: Jackie Frost).  I coloured her with markers and die cut the circle.  I layered the circle on a die cut snowflake and put everything on a white card base. 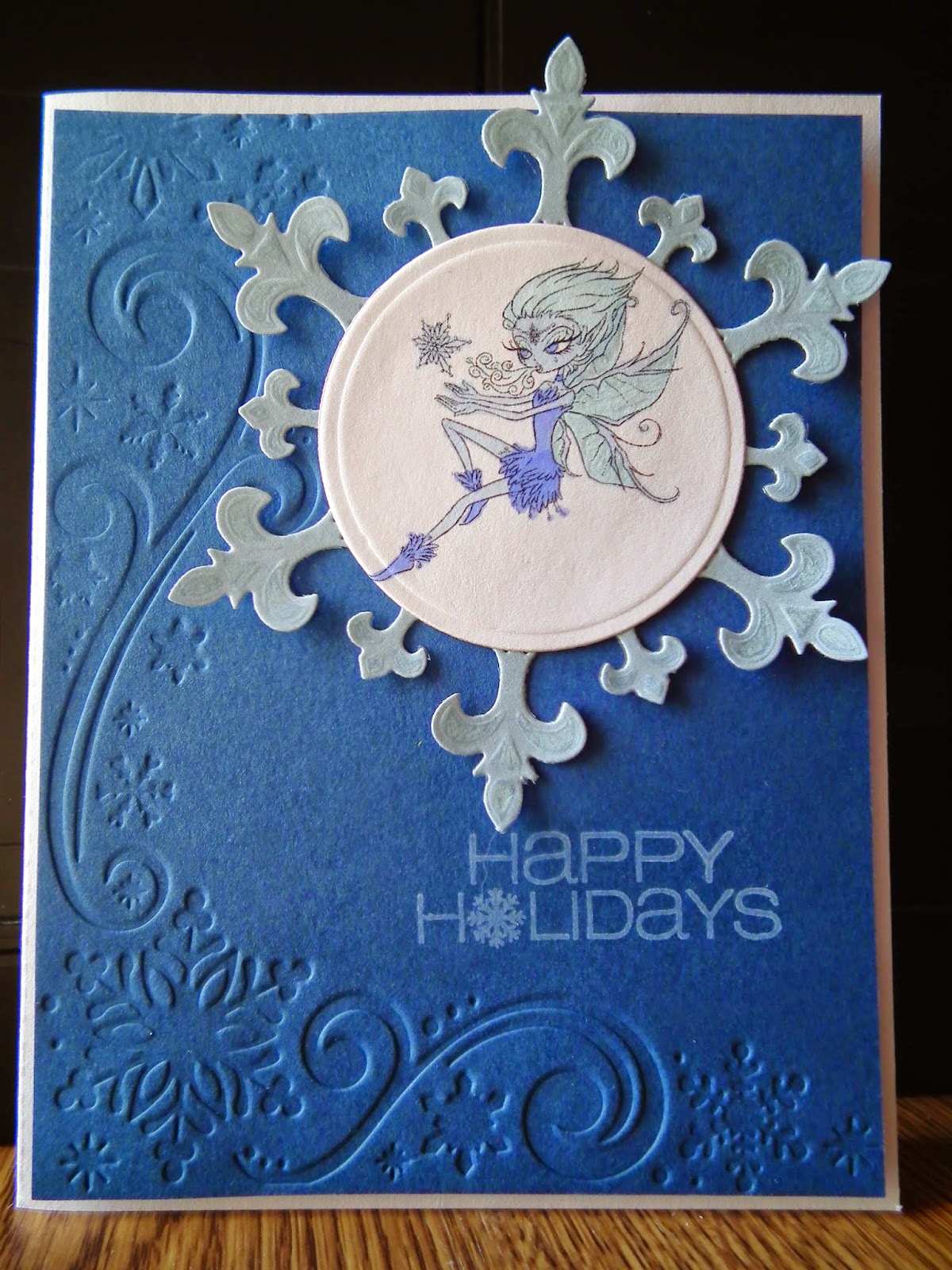 Posted by Jessica Strider at 7:31 PM No comments:

I started this card with a piece of dark green cardstock for the base and a piece of slightly smaller white cardstock for the front panel.  I stamped the angel and then die cut an oval next to it.  I stamped the harp and then started punching out lots of branches.  I lined the oval and glued a piece of music notation (a scrap piece from a public domain song I printed on resume paper a few years ago) behind it.  I added some red glitter gel pen to the stamps (the angel's corset and various flowers) before gluing the front panel onto the card base.

I very lightly inked three poinsettia flowers (cut on the Silhouette), and glued them together.  I used 3 daubs of a thick gold embossing paint in the center.  I took a sewing pin with a bead on the end and added beads I bought that form an angel and glued it to the back of the poinsettia before gluing the poinsettia to the page.  To finish, I added a few gold embossing dots at the ends of some swirls.

I'm entering this in Simon Says Stamps' Anything Goes challenge as well. 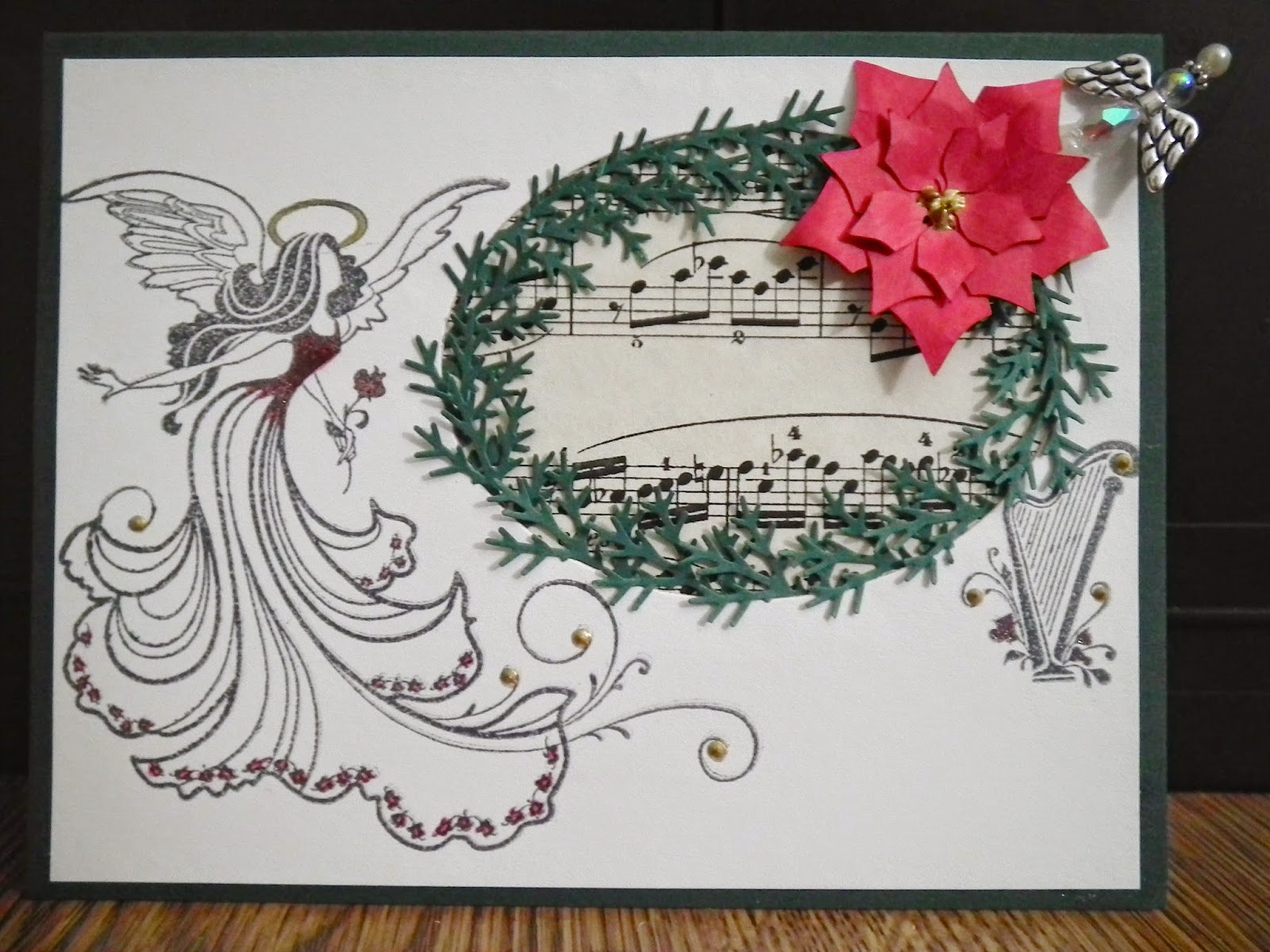 Email ThisBlogThis!Share to TwitterShare to FacebookShare to Pinterest
Labels: Angel, Christmas card, music, Simon Says Stamp Challenge
Newer Posts Older Posts Home
Subscribe to: Posts (Atom)
I spent several years learning about card crafting on my own before - finally - turning to the internet. This blog is as much about helping you avoid my crafting mistakes, as it is about sharing my journey and having some fun.