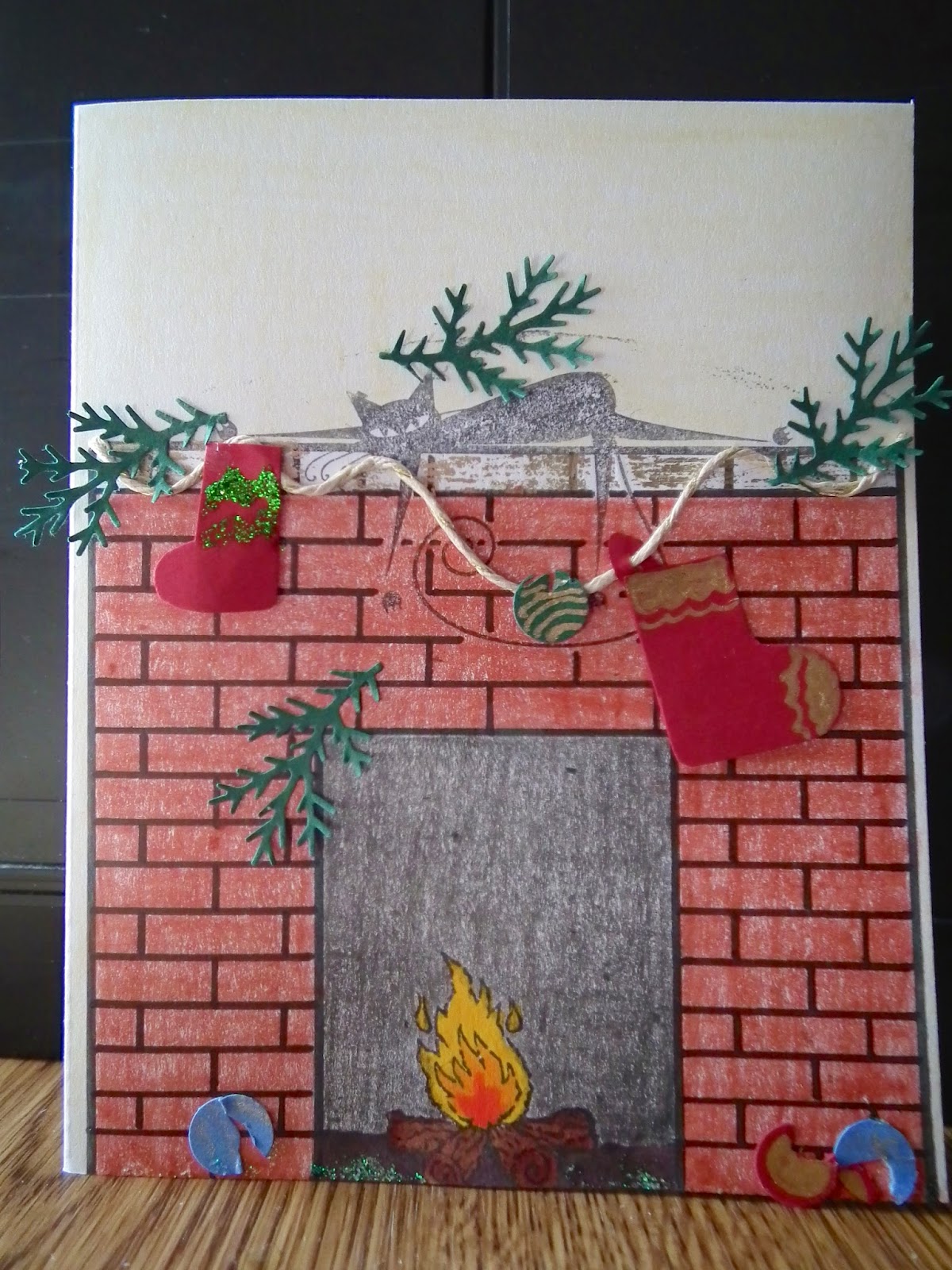 I started this card by printing out and colouring with markers the digital Lil Lads and Lasses Jackie Frost image.  I added some glitter pen to the wings to make them shimmer a bit.  I die cut the image out using a Spellbinders circle die.

I die cut a Spellbinders snowflake and used a marker to highlight the embossed parts, then added the fairy's circle on top.

For the background, I embossed a sheet of light blue cardstock and added the Casual Friday greeting.  I also added a piece of glitter ribbon before attaching the panel to the darker blue cardstock base. 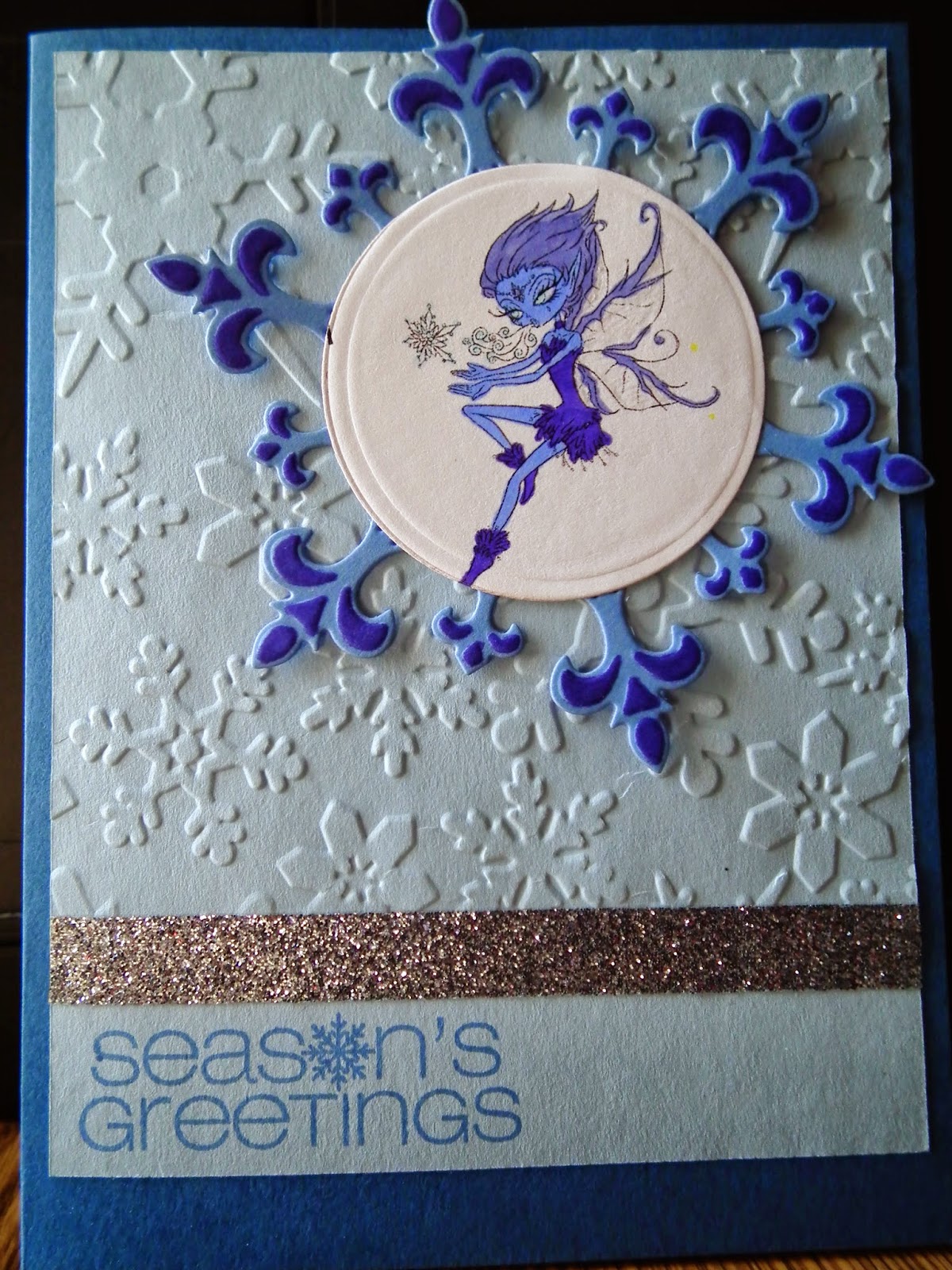 One of my sister-in-laws did some figure skating in her youth, so I looked around to find a nice digital stamp and stumbled on Lil Lolita Sookie Skates by Tickled Pink (via C.C. Designs)

I started out by printing the image on white cardstock and colouring it in using markers.  I used the Spellbinders Devine Eloquence as a template and cut around the edge, then used a blue marker to edge the cut.  I cut a frame using the Devine Eloquence die out of a light blue paper to back the image, and used a marker to darken the two side panels.

I die cut the skate (Marianne Designs) and used a silver gel pen for the heel and blades.  When mounting the image on blue cardstock I thought the card was missing something and so added two pieces of silver glitter ribbon behind the elements. 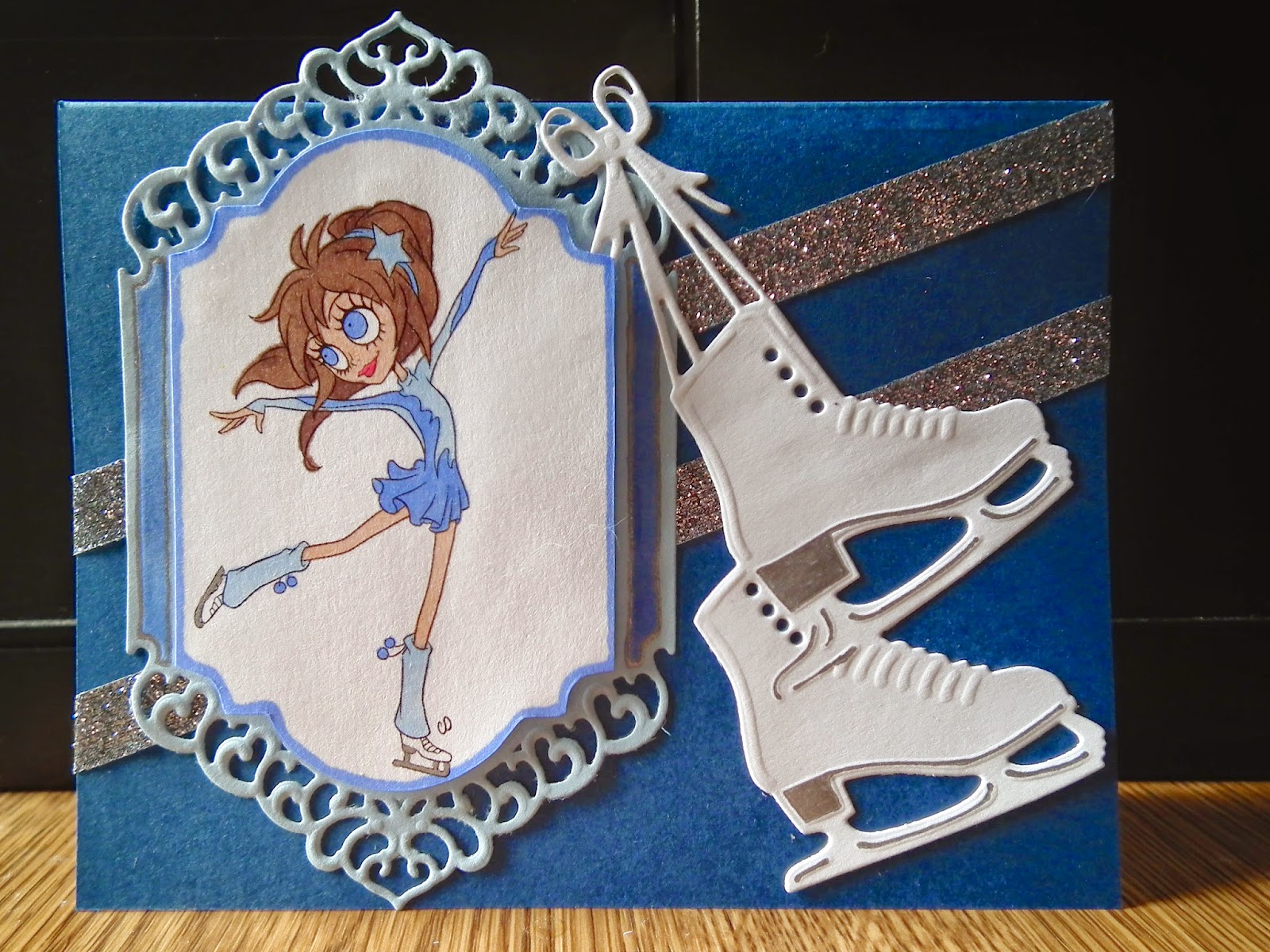 This is a card I made for my nephew who turned 1 recently.  I'm submitting it to Simon Says Stamp's Stamp It Challenge.

I started out by carefully stamping a corner stamp all the way around the card, masking it so I could make a full frame (you can see one spot where there's no blue dot between the shapes and another with 2 hearts meeting, showing where the stamp didn't do quite what was needed).  I stamped the hanging moon and stars, and the presents, then started colouring all the shapes with markers.

I stamped the sentiment and ran over the 1 with blue glitter glue and the large moon with yellow glitter glue.  I finished the card by attaching the panel to a piece of light blue cardstock. 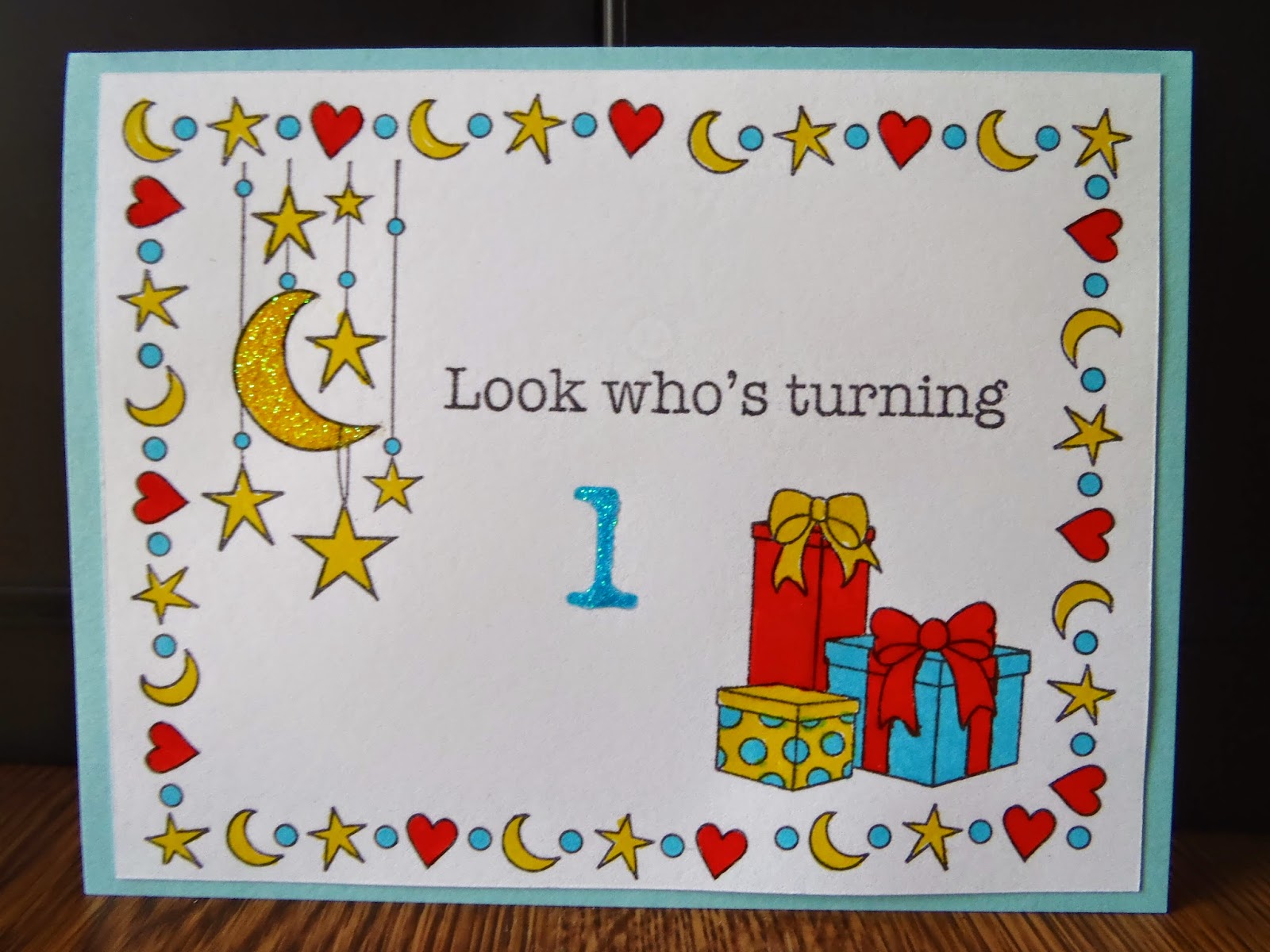 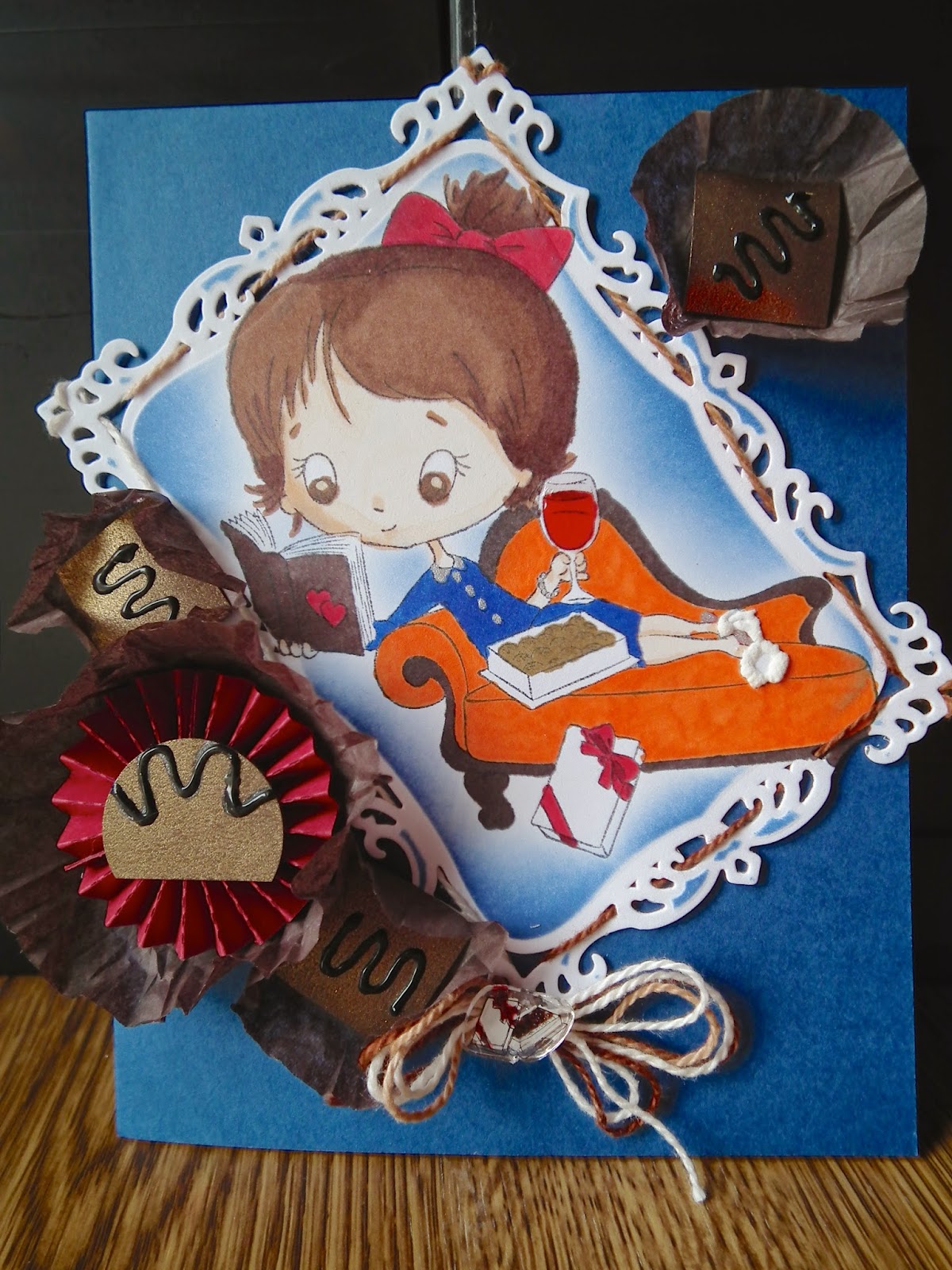 Email ThisBlogThis!Share to TwitterShare to FacebookShare to Pinterest
Labels: card challenge, Simon Says Stamp Challenge
Newer Posts Older Posts Home
Subscribe to: Posts (Atom)
I spent several years learning about card crafting on my own before - finally - turning to the internet. This blog is as much about helping you avoid my crafting mistakes, as it is about sharing my journey and having some fun.