I made this card for a 10 minute challenge using pink, pale green and grey, but didn't finish it in the time frame and so am just posting it here.  Adding the green was a challenge for me as it's not a shade I like, but it did look good as plant matter behind the swan. 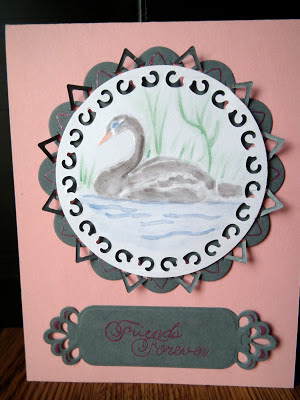 I used a new die set that folds over, giving a cool flower look to the outer circle.  I added the pink gel pen after putting the white circle on, so my lines aren't as straight as they should have been.

The swan is an embossed image (from a brass plate), which I coloured over with a versa marker and then laid chalk over.  The marker gives the chalk something to stick to so it doesn't rub off on your fingers.  The tag is a spellbinder die.  I originally stamped the sentiment with pale pink ink, but it was too light and so went over it with a gel pen.