I've wanted to make my own paper flowers and use them on cards for some time now, but it's only recently that I've actually started learning how to do this.  Indeed, though I have a cutting file for rolled roses I've been largely unsuccessful at making them (due in large part because I've been trying to roll them from the inside out, rather than the outside in).

Anyway, here are some of my recent attempts at making paper flowers.

The first is some rolled tissue/crepe paper (the stuff you hang for birthday parties).  I basically took it, folded it and cut petals, then tried to roll it so it would look decent.  When I was done (with a much larger flower than I can probably use considering the size of my projects) I flicked reinker ink at it to give it some colour.

The second and third flowers are rolled from cutouts (you can see one in gold behind them).  The white flower was rolled backwards but kind of worked.  The second one, in gold, was rolled properly.

The last two flowers on the top row are quilled using the turn over technique.  They look very nice and once my quilling tool arrives I'll be making more of those (for the record, a sewing needle stuck in an eraser does work as a mock quilling tool but not very well). 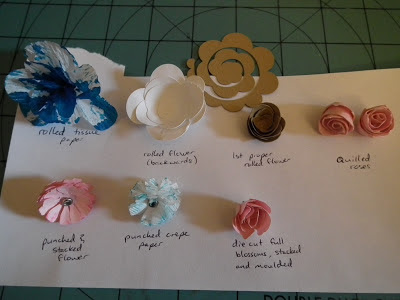 The last few are much better attempts.  I punched several flowers out and just stacked them around a brad in the first pink flower.  The one next to it used the same punch but this time I used folded crepe paper (like what I used on my fluorescent girl card last week).  I inked the edges of the paper a bit.

Finally, I die cut some rose blossoms from the Spellbinders Rose Creations die, moulded them and glued them together.  I like how they look and use some on the card I'm unveiling on Wednesday.
Posted by Jessica Strider at 3:08 PM