Today's Pop-Up Cards card is: Amazing Card 2: Cards that Flap: Hungry Kitty.  This is a card that required a close following of instructions.  As with the other cards, I copied the template into my silhouette and cut them out (the kitties, fish and plates).  The house and flap I hand cut.

Despite reading the instructions more than once I still managed to put one of the cat figures in the wrong place.  The point of this card is that you see the kitty on the front with the fish on the plate.  You flip the tab and there's the second (hidden) kitty with the fish bones.  You're supposed to put the kitties in particular places so that they A) are hidden by the flap and B) don't interfere with the flap.  I got A, but messed up B with the first kitty.  As a result, my flap doesn't work quite the way it's supposed to.  Still, an interesting technique. 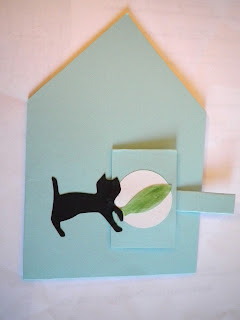 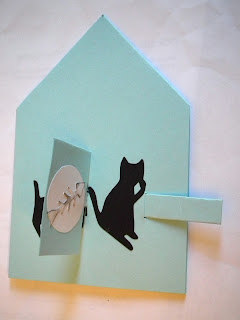 Posted by Jessica Strider at 2:34 PM