Have a Sweet Holiday Card

This is a card I made last year but wasn't entirely happy with and so didn't hand out.  I stamped the scene (without masking), coloured in the shapes and stamped snowflakes and the sentiment. 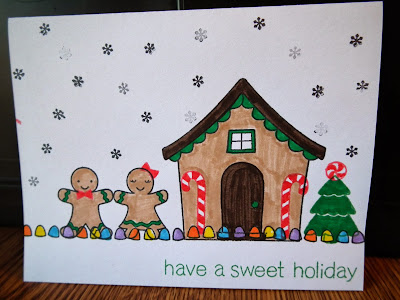 I haven't had time to craft in a while (and I won't have much again until Christmas and New Year's are over - welcome to retail) so again, this is an older card.

I started out by die cutting the frame and adding a light ink to the edges.  I then stamped and embossed the Jane images (from Papertrey Ink's Simply Jane stamp set).  I glued it to the card back and it looked empty, so I added the corner frame stamps. 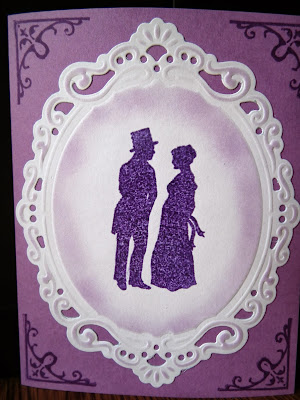 Posted by Jessica Strider at 9:30 AM No comments:

Some time ago I did this Penguin on an Ice Floe interactive card.  But I never finished it.  So I decided it was time I did.

I added some white gel pen to the penguin's body and orange to its beak and flippers.  I used a green gel pen to give the fish scales.  I stamped winter wishes on the pull tab, some waved below the ice floe and some snowflakes.

Voila.  Now it's ready to give as a Christmas card. 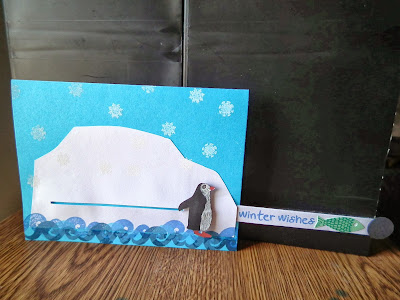 Posted by Jessica Strider at 10:00 AM No comments:

I started by die cutting 2 circles and stamping the penguin in the smaller one.  I coloured it with pencil crayons and glued them together.

The light blue panel was embossed and glued on the card.  Then I die cut and inked the label and stamped the sentiment on it.  I added a piece of dark silver glitter ribbon to the card and put the label on top. 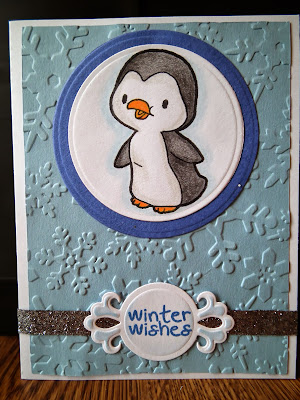 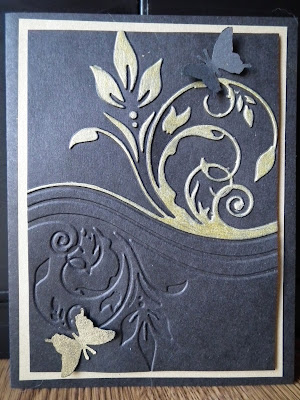 I made this card for Simon Says Stamp's weekly challenge, use a rubber or a clear stamp.  I used 2 rubber stamps.  For the wreath I used Versamark ink and heat embossed a sparkly dark green embossing powder.  I then coloured the bow with a red gel pen.  Then I stamped the sentiment with red dye ink.  Voila.  Easy peasy. 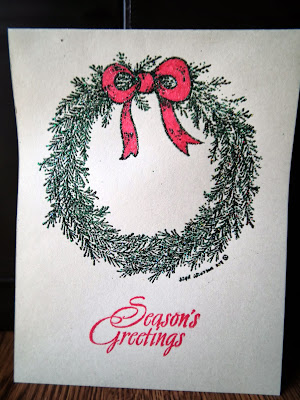 I made this card for a clean and simple challenge, but I don't think there's enough 'white space' as it were, so I'm not submitting it after all.

I started out with the white embossed angel idea and went from there.  I wanted something more visible, so I got an embossing folder that had an edge, and cut out the element.  I then stamped and embossed the image (I waited for the embossed part to be sure where to add the angel).  Instead of using my fine white powder, I used a sparkly one.  It may have been clear rather than white (they both look white in powder form), which could be why it doesn't show up as well as it should.  It's not particularly sparkly either, which sucks.

After the angel was embossed I used a tape runner to glue the dry embossed panel to the card.  For the sentiment at the top I used the fine white, which turned out nicely.  If I did this again I'd use the fine white powder for the angel too.

The paper warped a bit because I wasn't sure if the angel had embossed properly (it ended up a bit grainy).  On the other hand, the warp made the heat embossed parts show up better in the photograph. 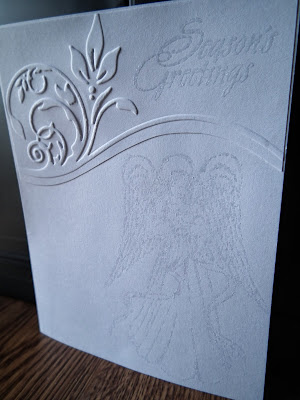 I discovered this site for stampscapes a while back.  While I love their stuff, their shipping charges are too much for me, so before taking the plunge and buying a bunch of stamps (to justify the shipping fee) I tried their paper saturation / 'painting' techniques to make a card and then use stamps I already own.

I used make up sponges to apply the many layers of ink on glossy paper, then stamped over it all with the closest silhouette stamps I had.  It didn't quite work (and I tried using a marker to increase the silhouettes, which was a mistake - the lines show up darker than the stamp ink, so it looks strange) but I can see myself trying this again when I have more time.  I haven't mounted it on cardstock yet, but I except I'll do so on black or dark blue. 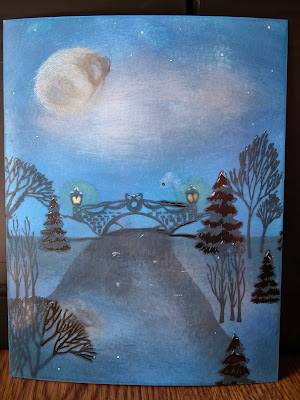 I'll be posting mostly Christmas cards from here on out, as I've made a ton of them (that I haven't posted yet).  Since my time is becoming more limited, I'll be concentrating on the rest of the Christmas cards I need.

But for today I've got a masculine birthday card for you.  It was a very easy card to put together, but uses an unconventional crafting product.  I don't do nail art.  Though I think it's lovely my nails break too easily (and often) for me to bother.  But I saw thin strips of metallic tape on sale for nail art and thought it would look great on a card.

I started with a piece of black cardstock, stamped 'Happy Birthday' in gold, then made some rays with the tape. The only thing to be aware of is the tape's not particularly sticky.  I suspect it's designed to have nail polish applied on top to keep it in place.  It works well enough though and is so shiny!  I finished the card by slapping the cardstock on a cream base. 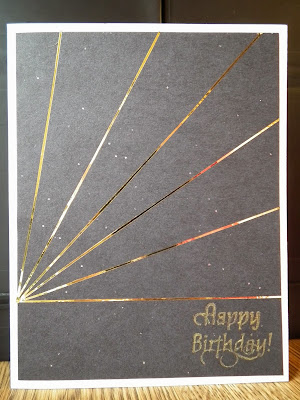 Email ThisBlogThis!Share to TwitterShare to FacebookShare to Pinterest
Labels: birthday card, masculine card
Newer Posts Older Posts Home
Subscribe to: Posts (Atom)
I spent several years learning about card crafting on my own before - finally - turning to the internet. This blog is as much about helping you avoid my crafting mistakes, as it is about sharing my journey and having some fun.