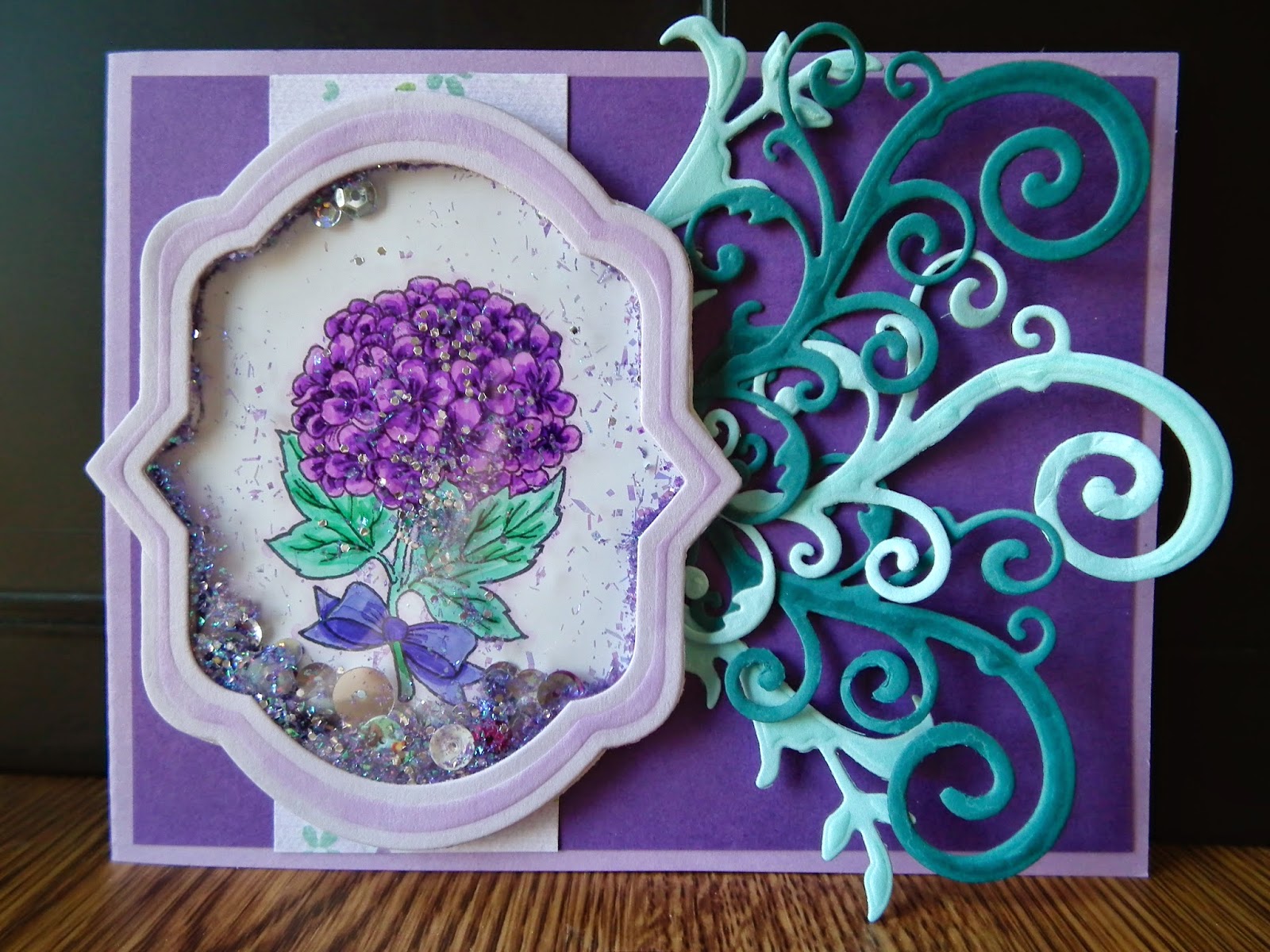 A month or so ago I won a Spellbinders prize on Scrapbook and Cards Today.  Well, today my package arrived.  The prize pack was a set of 3 In'spire dies.  Two of the dies I loved but couldn't justify buying (as I had similar products already) and the third I wasn't too sure how often I'd use.  Anyway, I opened the package and found this instead:

Awesome!  I have similar style tools for the point but nothing with the brush and I have a bunch of intricate dies I don't clean the pieces out of properly (which is probably why I have trouble with some of them).  I can see myself using this a LOT so I'm uber excited.

Craft companies are so awesome. :)
Posted by Jessica Strider at 6:44 PM No comments:

Feather in your cap card

I made this card for Clearly Besotted's Anything Goes challenge.

I started with a piece of glossy cardstock, upon which I stamped 2 feathers in different shades of blue.   I attached the cardstock to a dark blue card base and then die cut a label and stamped the sentiment, again in 2 shades of blue.  I grabbed 2 feathers from my stash and used the label and a hot glue gun to attach them to the card.  Because I had to work fast the label went on a little crooked.  Ah well.  For the finishing touch I added 2 dots of glitter glue to the label. Posted by Jessica Strider at 3:43 PM No comments:

I made this card for Marianne's Design Diva's flowers challenge.

I started with a card base I made a while back when I die cut the largert of Petra's Large Ovals (LR0240) from one side of a piece of cardstock.  I kept the card thinking I'd make a window card from it, but the die cut's quite large and the thinnest sections bent, so I needed something that could stabilize the card.

I saw the flowers challenge and knew I wanted to use this 'scrap'.  I die cut several fan bases, and one top, inking the top with a bit of white pigment ink (LR0168).  So you could see the different pieces better, I inked the edges of the fans with a dark purple ink.

I cut and embossed two sizes of flowers (LR0169 & LR0168) inking the embossed parts with purple, plus some leaves (Tiny Swirl L3).  I also inked the card base with some teal, to give it some colour.

I glued the fan pieces together and then to the base.  For a bit more contrast I cut a piece of cardstock that matched the leaves to layer under the upper fan piece and glued those together.  I carefully glued the fans to the card base, making sure it supported the thin edges at the top and bottom.

I glued down the leaves - adding some more support - and the flowers, with a generous dollop of purple glitter glue in the centers. 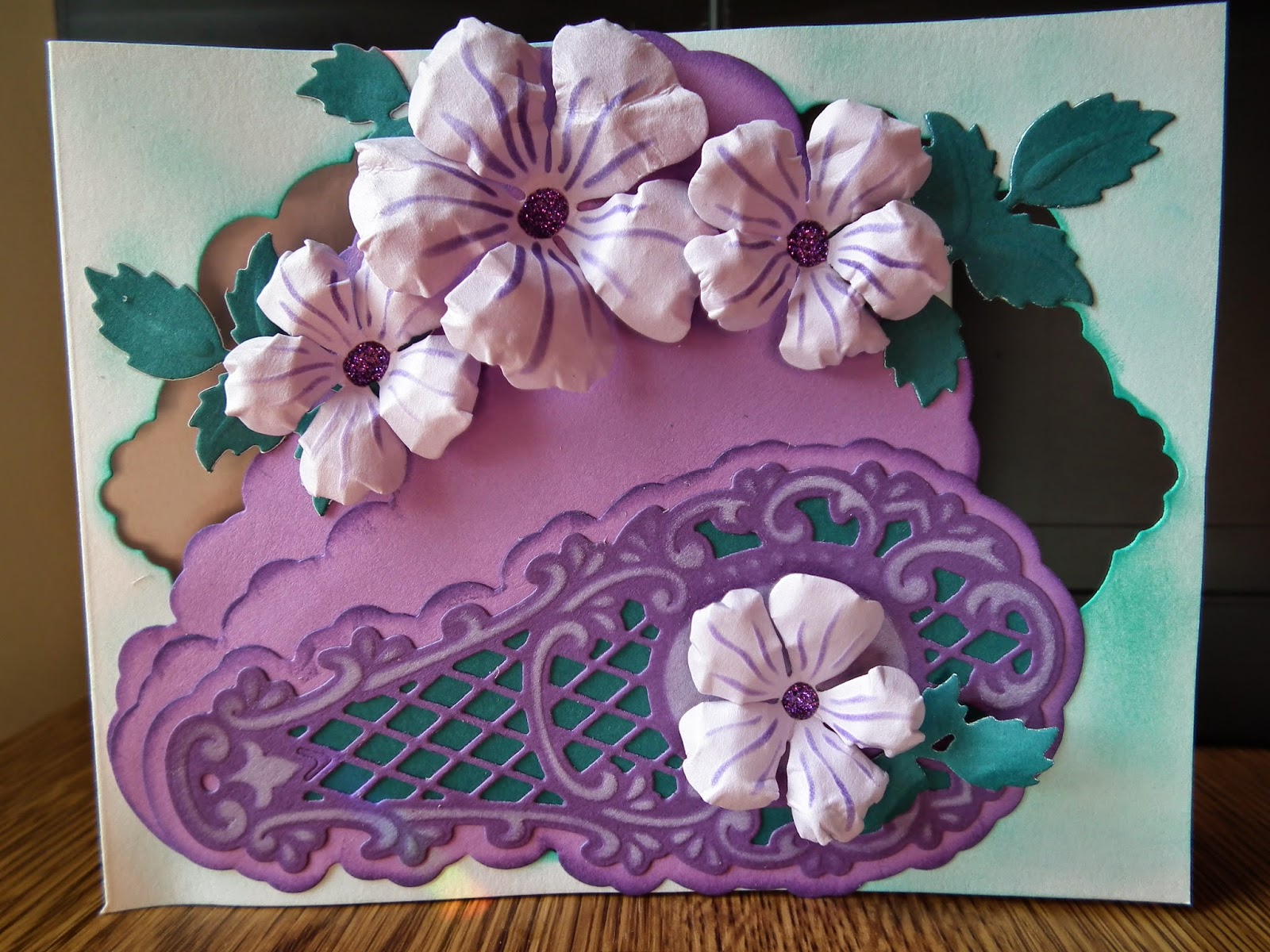 One of my nephews recently turned 3 and I wanted to make a special birthday card for him.  He's obsessed with the movie Cars, so I looked on pinterest to see what others had done and found these cards.

I made a #3 template with scrap paper, then cut out the top loop until the underpass from one sheet of black cardstock, then the underpass and the bottom of the 3 with a second piece.  I glued the pieces under the underpass section so the join wouldn't show.  I used a white gel pen to add the dotted line and used pop dots to keep the upper track separate.

For the card base I scored a checkerboard and coloured half the squares with a grey pencil crayon.  The car is a sticker. 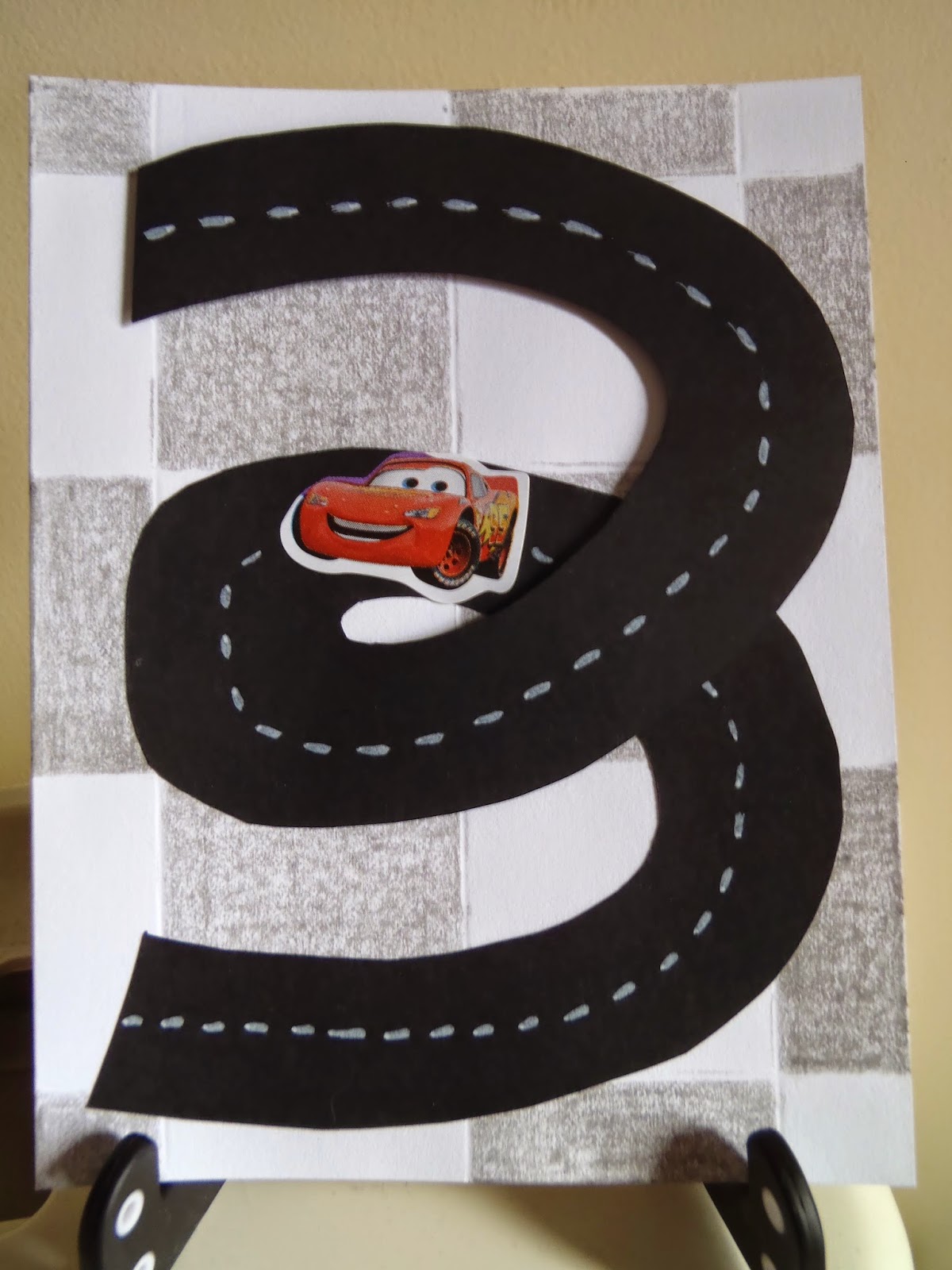 This week's Simon Says Stamp's current challenge was just what I needed to get me to make my Father's Day card.

I bought corkboard sheets years ago and have never used them, and since I recently got charm tool dies, I figured now was my chance.  I die cut the tools out of black cardstock and used a silver gel pen to colour the metallic parts.  I cut out a piece of corkboard and rounded the edges.  For the background I embossed silver cardstock.

I don't have a proper Father's Day sentiment stamp, so I used an alphabet stamp I really like (and used for the first time).  To get the letters straight I taped a piece of acetate to my card.  I still got the T and H a bit higher than the other letters (as I did each letter separately so they'd be closer together), but on the whole I'm happy with it.  I used a silver pigment ink, and so had some stamp cleaner on one cloth and water on another so I could quickly clean the ink off and not stain my stamps (and it worked!).

To attach the corkboard, I used 4 screw brads (which are attached to the silver cardstock).  For the cardstock I used a tape runner.  I glued the tops of the charms to the corkboard so the bottoms swing free.

My dad's quite a handyman who worked with metals for most of his career, so I think he'll like this. 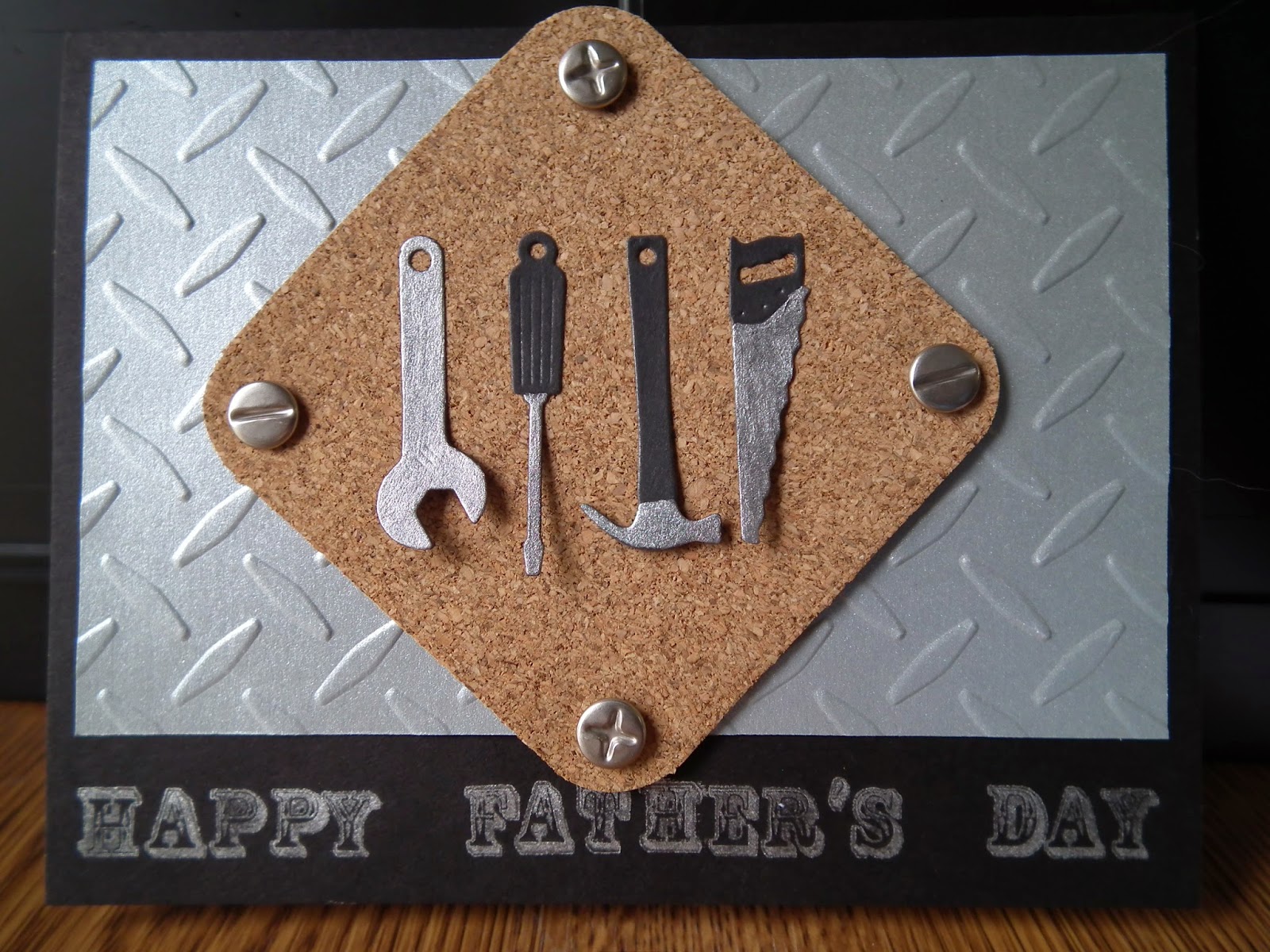 I made this card for Kenny K's current 'Anything Goes' challenge (they've also got a blog hop with some great prizes).

I printed the Dirt Bike Mike image from Kenny K out around Christmas and then wasn't sure what to do with it.  I started today by cutting it out by hand, keeping in all the extras (mud splatter and speed lines).  I then coloured it with Copic markers (I'm just learning how to use these, hence why the red bled into a lot of the yellow's spaces).  I've only got a handful of markers to try them out and see if I can use them well enough to justify a greater commitment.

I added a few Crayola markers to fill in for greys I didn't have, so the bike's got a bit more colour.

The base card is black (you can't see it as my background is also black).  I slanted the red cardstock on top so it's a little offset.  I embossed the red panel with a flame pattern.  I had a few Silhouette cut gears (in black) leftover from a previous project and punched a few in yellow and then stamped gear images on top so they would look less like flowers (the punch is designed as a brad cover, but I liked how similar it looked to gears).

I also did a triple twist of thin metal wire.

I glued one gear under the red panel and the rest on top, used hot glue to keep the metal twist in place and covered the glue spot with the biker, which was attached with pop dots. 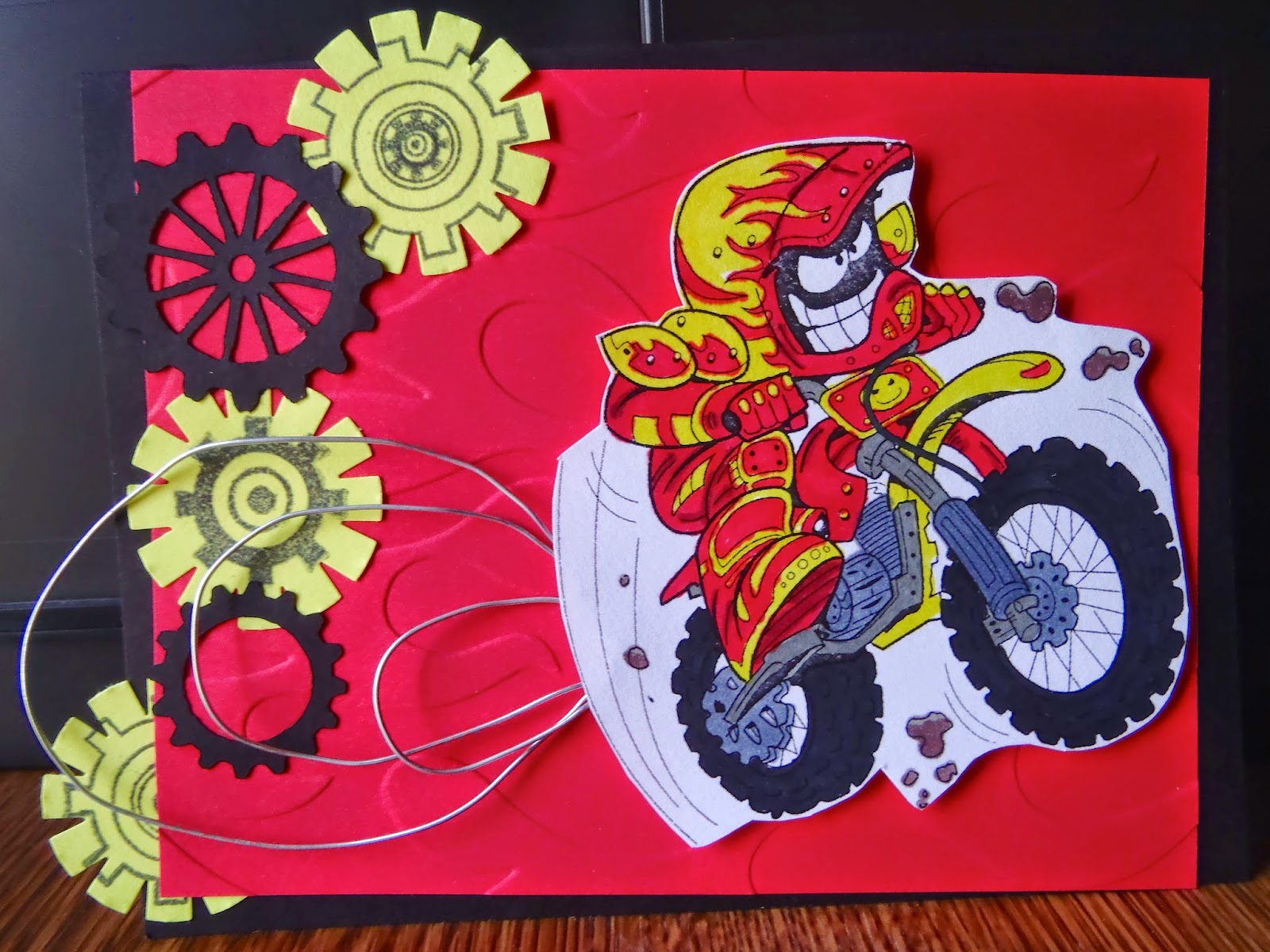 Email ThisBlogThis!Share to TwitterShare to FacebookShare to Pinterest
Labels: card challenge, Dirt Bike Mike, Kenny K, masculine card
Newer Posts Older Posts Home
Subscribe to: Posts (Atom)
I spent several years learning about card crafting on my own before - finally - turning to the internet. This blog is as much about helping you avoid my crafting mistakes, as it is about sharing my journey and having some fun.