This card is for the Some Odd Girl card challenge, which is a card sketch: 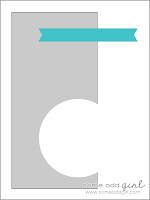 I tend to use these pretty literally, so here's my card. 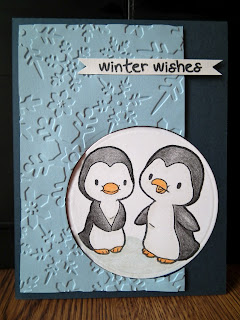 I started with a piece of dark blue cardstock for the card base (it looks black in the picture, but it's really navy blue).  I die cut the circle out of the light blue cardstock and then embossed it with a snowflake folder.  I debated using a smaller circle for the inset piece, but it looked strange, so I used the same die to cut out a white circle which I then stamped and coloured with pencil crayons.  The winter wishes was carefully masked so I could separate the sentiment (which overlaps a bit), and the ends cut with scissors.

If you're interested in trying digital stamping but aren't sure how, or if you already use digital stamps but could use some pointers, Some Odd Girl has put out a free downloadable ebook with information.  You get an image to practice with too, which is pretty cool.
Posted by Jessica Strider at 11:38 AM

Too cute! Thanks for playing along with us at the SOG challenge!