I picked this blue because I don't really like it and I didn't think the homemade embossing displacer would work well for the circle.  Well, it worked beautifully so I had to figure out what to do with the card.  The idea for an ornament came to mind so I cut out a circle that could fit around the embossed area.  In retrospect I should have chosen a dark blue rather than white.  I also should have use my Memento blue ink to darken the embossing area before adding the white ring (as I got a bit of blue ink on it).  I used a gold gel pen to make swirls on the ring and add some colour to the snowflakes.  I also added an ornament topper in gold ink and ribbon.  The sentiment is from Kaiser Craft's Christmas sentiments set. 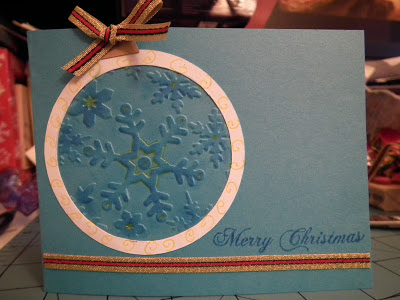 When I was writing up my Christmas cards I realized I REALLY didn't like this one.  So much so, that I was too embarrassed to assign it to anyone on my list.  Having received my Spellbinders Classic Circles Small in the mail the previous day I decided to try something to fix this.  It was my first time using Spellbinders.  Since I have a Silhouette I didn't want to spend more money on dies, especially simple ones like circles.  But... I've seen techniques that are easier to do with dies, like placing a hole on a particular point on a card (which is hard to do with precision on a Silhouette), etc. that I wanted to try.  I also like the embossed edge Spellbinders give.  Anyway, I was surprised by how much the dies cut into my acetate cutting pads.  Up until now I've only used my Big Shot for embossing, which keeps the acetate nice and clean.  I now understand why people suggest turning the acetate over when die cutting, so they last longer. 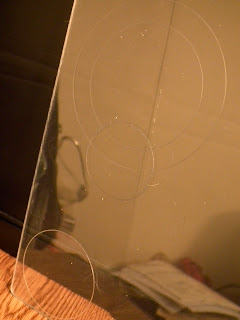 The acetate is quite reflective, so you can't see the circles too well, but there are 4 of differing sizes cut into the pad.

I also got to finally use the crease pad I bought about a year ago, thinking it was the rubber pad, and the rubber pad I got yesterday.  Together, they add up to the thickness of a cutting pad and let you emboss the Spellbinders dies.  (The die came with a different sandwich that called for a tan rubber mat, but my sandwich worked fine and doesn't require me to buy another mat to use.)

I decided to cover the white circle, which just looked odd, with a dark blue one.  The embossing on the circle helped make it look more professional.  I also went over the gold again, with a pen that looked less yellow.  I should have used silver for the accents instead of gold.  Ah, well.  Live and craft some more. 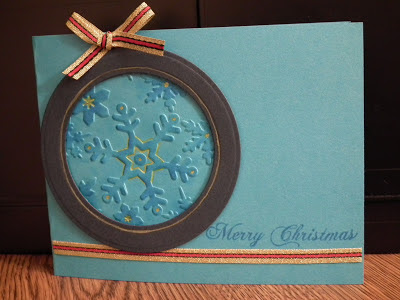