In yesterday's post I showed a card using a concertina (or folded) butterfly, but thought it deserved its own post.  I got the pattern by emailing Shirley at Shirl's Cards.  She's got a video tutorial on how to make the butterflies so I won't go in to that. 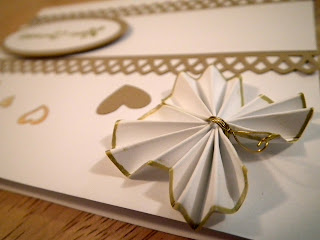 I will mention that slicing out the segments in the center is necessary to give it a smaller body.  You really need a score board for this to get the crisp lines and make folding easier.

I don't like things that pop off of cards too much, as that makes them harder to mail, so I tried scoring the wings every 1/8 inch.  Yeah, don't do that.  It becomes too hard to fold down the creases.  1/4 inch works great.  I also found that scoring lines every 1/2" then turning it over and scoring the other lines made folding easier, as you're working with the fold rather than against it half the time (and I didn't try this with the smaller folds, so that could fix the problem there, though my fingers seemed too large to deal with the small folds so maybe kids would have more luck with that).

As a homemade embellishment, it looks pretty cool.
Posted by Jessica Strider at 11:03 AM

Hi Jessica, thanks for your comment on my blog. I will join yours as a new member...this card and butterfly are just gorgeous...keep in touch..luv aussie annie