I finally got my energy back and made some cards yesterday.  Here's the third card I made, which I'm publishing first as I'm submitting it to the Simon Says Stamp Anything Goes challenge and the Moxie Fab's Creative Card Challenge: Make Your Own Background Paper.  I even used Penny Black stamps for the card (which SSS requested but isn't a requirement). 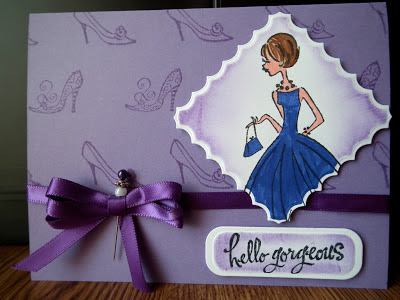 I started out by stamping the woman on white cardstock, then die cut it out.  I inked up the frame with purple die ink then coloured the image.  Next, I stamped the purple shoes on the cardstock (for once I actually pencilled a grid so they'd be mostly in line with each other).  I originally had the sentiment on dark purple paper, but though the white with ink would go better with the rest of the design.

I took some ribbon I got a Fabricland and did a bow using this fantastic technique, added the backing ribbon before tying the center and then glued the whole thing on the page (one dot of hot glue gun glue at the edges on the back of the card and one under the ribbon to keep it in place).  To finish it off, I finally used a pin!  I took a sewing pin I got in a package at the dollar store that has pearled balls on the ends in different colours and so chose the purple.  I then added a metal bead and a pearlescent glass bead before pinning it through the bow.  As the card's planned for an adult who has no kids I'm assuming the pin end sticking out won't be a problem.

The final touch was adding a bit of glitter pen to the necklace, bracelet and purse chain.

This one is so pretty! You keep getting better and better at this!

Hey Jess! Thanks for linking this up to the Make Your Own Background Paper Challenge in the Moxie Fab World! I'm so glad you joined in on all the fun! :)

If some one desires to be updated with newest technologies then he must be pay a quick visit this web page and be
up to date all the time.

Visit my web-site - read what he said