Get it in Gear

I recently became aware of Kenny K digital stamps.  I've wanted to try digital stamps for a while, and as they've got a free download, I thought I'd check it out.  I wanted to see how easy it would be to use the png file they provide in my Silhouette studio software to create a cutting file.  It went quite easily (though I did have to tweak a few of the lines, as I'm a bit of a perfectionist when it comes to crafting).  Anyway, I liked how it worked and decided to buy a few images, as I really like the artwork on these (note, some of them tend to the adult side of imagery while others are kid friendly).

I'm entering this card in their blog challenge for this week, Layer it up.  I'm also entering it in Simon Says Stamp's Anything Goes challenge.

This is one of the most complex cards I've made in a while, with quite a number of materials and steps. But I love how it turned out. 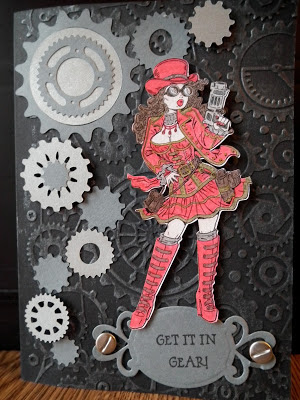 I started by embossing the background and rubbing a silver Gelato stick over it. I wanted a rougher look so I made sure the coverage wasn't complete.  I also only wanted it on the raised pieces and so rubbed with some care.  I then buffed the Gelato with a dry craft sponge (I wasn't too thrilled with the finger or tissue attempt last time.  The sponge worked great, not stealing too much colour, while giving good coverage).

The next step was to get my Kenny K image - Scarlett West.  I imported her into my Silhouette studio program, traced her to get a cut outline and then polished the outline a bit.  I wanted the outline to show, and so made it a bit larger than the printed image (obviously this worked better in some areas than others, but I didn't mind how it turned out).  I also had to add cutting areas around the hip bag, as that wasn't part of the trace.

I forgot to add my registration marks, so when I printed the image and put it in the Silhouette for cutting, there was no way for the machine to know where the image was.  Yeah, that took a bit to figure out.  Once I had the registration marks on, I printed it again and then cut the image.  I love how little work this will be in the future.  I don't mind fussy cutting small images, but something this complex takes time and that's better spent doing other types of crafting.

While I had the Silhouette on I decided to cut out various sized gears in silver and black cardstock for decorations.

I coloured Scarlett West in with pencil crayons and then went over it with gamsol and blending stumps so the colour looked uniform.  I didn't bother much with shading for this image, being impatient to see the card put together.

I finished her off with some gold and silver markers and a red gel pen,  I also added dabs of glossy accents (rather than my usual Mod Podge, which was just so messy for small jobs) to the goggles. 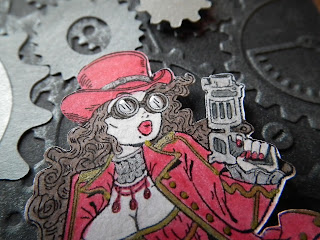 To finish it off, I die cut a tag and stamped the sentiment on it.  It's a cling stamp and I had to write the sentiment on the back myself, making placement a bit tricky (as evidence by the fact that it's not centered here).  I used two brads to hold it in place.  The gears are alternately glued on and popped up, but I tried to make the teeth line up so it would look realistic.  I also popped Scarlett.

Email ThisBlogThis!Share to TwitterShare to FacebookShare to Pinterest
Labels: card challenge, digital stamps, get it in gear, Kenny K, steampunk

Oh wow, what a cool card! Neat techniques too.