I had a different post in mind today, one that followed after the last two posts, but then I made a card and, well, it exemplifies what I'm trying to do with this blog so I thought I'd post about it now.

Though I have a booklet with card ideas and layouts, I don't use it that much when I card craft.  I tend to start my cards by picking a product I want to work with (stamp, paper, sticker) and then building it up from there.

Yesterday I wanted to work with a new mini beach stamp set I got.  It only has a few stamps, and one of them is a pair of sandals.  I've been seeing sandal cards all over and wanted to try my hand at one.  I like this particular stamp as it's got a separate stamp for the thong.

So, I picked brown for my backing and dry embossed a sheet of core'dinations cardstock that I could then sand a bit (to show the design better).  Then to the stamping.

First mistake, though this isn't really a mistake.  The paper I picked to stamp on was shiny and a bit ridged, so it didn't hold the ink very well.  I actually like it as it kind of looks like the sandal is a hologram.  The next time I use that kind of paper I'll probably use a pigment rather than a dye ink though.  This strip was supposed to cover the width of the card, with 3 sets of sandals and the sentiment "Enjoy Life's Moments" (from a cheap set of 4 clear stamp sentiments I bought).

On to mistake 2.  I decided that since the sandals didn't stamp that darkly, I wouldn't stamp the second part I'd just draw it in with one of my gel markers.  I tried a few to see which would stand out the most (black) and used that.  Somehow I drew the first strap backwards (bowed in rather than out).  Yeah, that looked bad.  So, quick fix - cut off the first set of sandals.

This led to another creative moment.  Now that the contrasting band no longer fit the width, the card looked empty.  Answer: ribbon!  After some thought I picked a solid cream.  I marked a line on the back to help line up the ribbon when I glued it on with my hot glue gun.  In retrospect I should have put two lines (top and bottom) or used a full piece of ribbon rather than 2 small pieces because this is how it turned out.  (I'm using a ruler to show you how out of line the ribbon is). 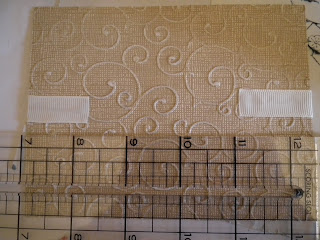 Yeah, that's pretty noticeable.  Obviously, adding the center panel to this will show it off rather than cover it up (and I'm all about covering up mistakes).
So, what to do?  That's right, you turn the center panel, making it crooked.  This lessens the effect of the ribbon while making it look like I'd meant it to be off center (at least, that's what I'm telling myself). 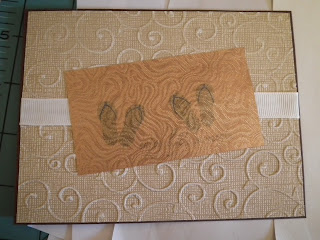 The final mistake I made, and I'm blaming this on fatigue and having made several mistakes already, was to glue my front panel (the embossed panel with the gold panel and ribbon on it) to my card upside down.  Luckily I used a cheap dollar store tape runner because I was able to take it off (without ripping anything!) and put it on properly.

Sometimes being a crafty person means thinking, well, craftily.  Learning how to fix mistakes, or seeing opportunities in mistakes, not only helps you learn, but can teach you interesting things.
Posted by Jessica Strider at 11:06 AM

All that schnibbling you did as a kid has paid off!!!!!!

I can see KD following in your footsteps...or should i say foot prints.

@ Patty: Yeah, you get creative after a while and figure out how to make your mistakes seem intentional. I'll probably give this as a father's day card (even if it looks terrible my dad will say it looks nice. :) ).

@ Karin: Really, KD's into arts and crafts? I remember driving all of you nuts with my bits of paper as a kid. LOL.