I originally planned to do a biplane card for this challenge/hop, but I saw someone else do that, so I decided to come up with another idea.  Here it is: 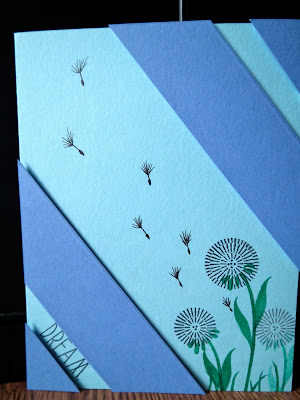 I started out with a light blue card and a second piece of cardstock in a darker blue.  I scored the darker panel how I wanted to cut it (so I wouldn't need to add pencil lines, and I kind of like the bits of scored edge you can see on the panel pieces).  I cut the panels and then using the off piece in the centre, drew pencil lines where my stamping would have to go (I did the same thing for the sentiment).

The stamps are all from Papertrey Ink's Daydreamer's set.  I used black and grey ink for the dandelion heads, and a green Crayola marker for the stems and leaves.  The flying dandelion seeds were done with a fine tipped black marker.

I attached the panels with pop dots and voila.
Posted by Jessica Strider at 4:04 PM

This is so lovely! I love how you added the flying dandelion seeds!

This is so sweet. I love the seeds too!

This would make a great masculine card! Nice!