Today's card is fancier than I normally make, but I LOVE these cards (even if I sometimes think they're too busy, hence why I don't make them often.  They're also time consuming but definitely worth the effort).

This card was specifically designed for JustRite's Friday Challenge #94, which is a sketch challenge.  I decided to make the card birthday themed so I could also submit it to Simon Says Stamp's Happy Birthday challenge.

I started out by die cutting my base using a Spellbinder's die.  I used the same die to trace the center area (which doesn't die cut) on my patterned paper and then hand cut it out so it would follow the lines of the die cut.  The center panel is also a Spellbinder's die, and the stamps JustRite (You Inspire Me), stamped with grape Memento ink.

I cut 2 shades of ribbon and tied them around the center panel before glueing the panel onto the card base.  The center panel was attached to the card with pop dots and the bow tied separately and glued on.  Finally I stuck a pin with various beads on it through the center of the bow. 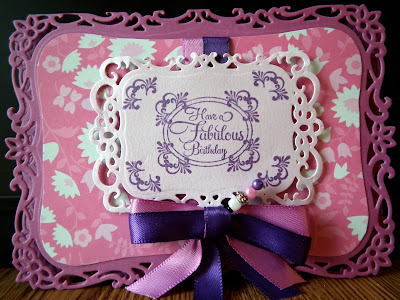 Posted by Jessica Strider at 2:56 PM

This is gorgeous! Love the ornate edges from the Spellbinders, and that double ribbon is so opluent... very elegant card! :) Thanks for celebrating with us and playing along in our "Happy Birthday" challenge over at the Simon Says Stamp challenge blog! xo

Very pretty card! I can tell it was time consuming but the result was worth it! :)

Such a happy and beautiful birthday card! Thanks for joining us at JustRite Inspiration ;-)

Such a lovely birthday card with those Decorative Labels Eight dies! Just got mine & can hardly wait to use them.