After several days of not having time to card craft, Saturday I managed 3 cards.  The two butterfly ones I've already posted and didn't take much time at all to make.  This last card was time consuming but I'm very happy with how it turned out.  I made this for JustRite's Window of Opportunity challenge.  The idea is to have a window from one layer of your card to the next, that draws your attention as you open the card.

I had the idea that I wanted more than one window and so started with a piece of cream cardstock and scored 2 lines rather than one center line.

Starting on the inside, I stamped my frame and the two sentiments (one fudged a bit so I evened it out with a marker).  Then, using my light table I carefully traced my window on the two flaps, so only parts of the sentiment would show up on each page.  I then cut the windows out with a craft knife.

Once the windows were cut I stamped the frames around them so they'd be properly centered.

I thought the card looked too plain so I started adding embellishments.  For the front I started with the little accent stamps in the corner and the ribbon, then I added the Spellbinders vine and punched ivy leaves.  The tiny butterflies were punched out of vellum and coloured in pink marker on the back.  This made the wings curl up (which I wasn't expecting but worked out great).  I added a dot of glitter glue in the center of each.

I thought the middle panel needed some colour so after stamping the corner accents I added green to the frame.  In retrospect the marker I used had too thick a head to keep the detail in the stamp, so I should have used pencil crayons for that.  I added some larger punched butterflies to this page, punched out of a thin pink paper.

I decided the last panel was fine with the frame alone.  All of the stamps are from JustRite.  They're stamped with increasingly darker inks as you open the card (so light pink on the front and red inside). 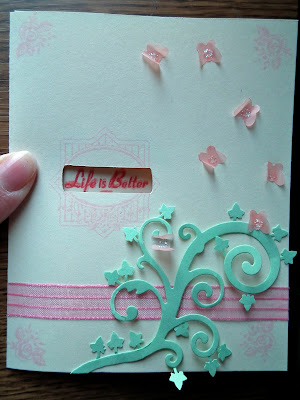 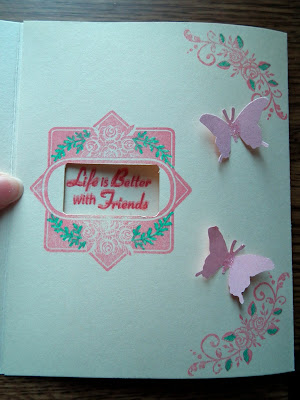 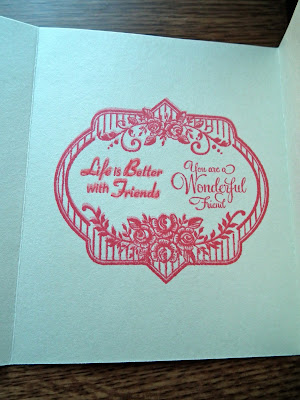 Posted by Jessica Strider at 12:57 PM

Such a BEAUTIFUL Card!! I LOVE your take on the Window Challenge!! THANKS for sharing and have a FABULOUS WEEKEND!! =)

Like your double window! And your butterflies are too cute. :)

You went above and beyond with TWO windows - LOL! Love it! Thanks for joining us at JustRite Inspiration ;-)

Beautiful card!! I love that color green with the pink. And the butterflies.

I'll bet getting the windows I the right position would have been finicky business! Very cute!