I recently won a stamp set from Some Odd Girl Stamps called Clever Kitties.  I decided to take the opportunity to buy some of their other sets, as I love their designs - particularly the critters.  Yesterday they arrived, but I didn't have time for stamping so I finally got to play with them today.

I've wanted a mermaid stamp for ages, so instead of playing with the kitties (sorry kitties, I'll get to you soon) I went for the Under the Sea Mae set (they've got several characters they use, and Mae is one of them that's been turned into a mermaid for this set).

I started out with white cardstock.  Instead of inking in black the way I usually do, I decided to ink it in teal.  That set the tone for the rest of the colouring, which was done with pencil crayons and blended with gamsol.

I cut the image out with an oval Spellbinders die.  The oval came out when I switched plates for the embossing, which is why it's a bit lopsided (you can't really see it in the picture).  I don't mind though, I think it adds something to this image.  I used a red gel pen for the 'stars' and a clear one to go over the fins so they shimmer a bit.

I decided on a dark teal cardstock and cut and inked the sentiment label (also Spellbinders).  For the fish, I used the image from the Clever Kitty's set (so I did play with them a little bit), inking them with markers.  The red one's a reverse image, stamped first on plastic and then on paper.  As it came out very faint I just coloured over the lines with the marker again.  They're filled in with pencil crayon.

Something was missing...  I looked around my craft table and spotted some lighter teal crepe paper that wrapped stamps from an order a while back.  Perfect.  I punched out some flowers, stuck a rhinestone inside and wrapped the petals around them so they'd look a bit more dimensional before smoothing them back.  The mermaid and label are tape gunned on, the flowers glued and the fish on with pop dots.

I have to admit, I really like how this card turned out. 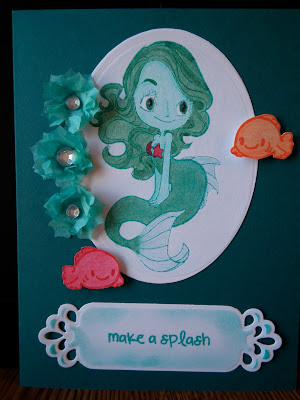 Posted by Jessica Strider at 4:14 PM

Email ThisBlogThis!Share to TwitterShare to FacebookShare to Pinterest
Labels: mermaid, Some Odd Girl