I made this card for Papertrey Ink's Make It Monday Challenge, Watercoloring Embossed Images.  This is a fun technique.

All of the stamps are from Papertrey Ink's Up, Up, and Away set.  I started by stamping the hot air balloons on watercolour paper.  I put a few drops of different coloured reinkers on a piece of plastic and got out a container of water and a brush.  Then, taking small amounts of ink and water, I carefully painted the balloons.  For the baskets, as I don't have a yeller reinker, I tried something different.  I coloured on the plastic with a water based Crayola marker to get some ink, and used that.  When they were dry I cut them out.

For the background (also on watercolour paper) I painted the hills with a peacock shade of green, using more water to wash out the colour for the hills further back (and yes, I realized after gluing my balloons on that I'd messed up the perspective).  For the clouds I again coloured with markers on the plastic, this time in two shades of grey.  I added some water (probably too much) and painted the colour directly on the cloud stamps.  I actually like the marbled effect I got.  It worked well for clouds, though I won't try that for solid images.

I glued the two smaller balloons on the page and used pop-dots for the largest one.  I also punched one cloud and popped that on for dimension.  Finally I stamped my sentiment and added it to the back (and then realized I should have done that before adding the popped elements). 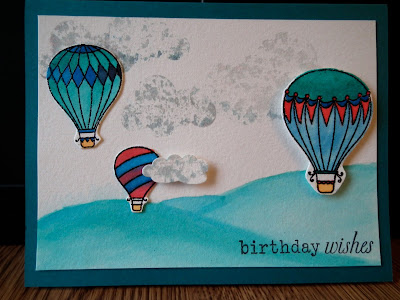 Posted by Jessica Strider at 4:09 PM

Beautiful! Those clouds are very realistic behind those bright balloons!

I'd like to fly away in one of those colorful balloons.

Beautiful card. Love how you did the hills. that blue is gorgeous. Cute balloons.