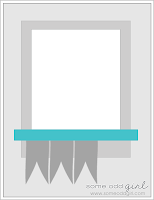 And here's my card: 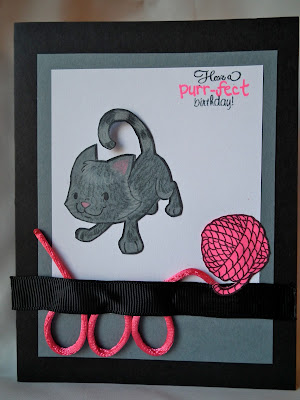 I started out with the idea of a cat playing with yarn, and having the yarn be the 'flags' at the bottom of the sketch.  Which meant finding yarn, or something close enough.  The only thing I had was pink floss, so that set my colour scheme.  I decided that since I needed two frames the pink would go best with a monochrome look, and so settled on black, grey and white.

I cut out my frames and used a tape gun to attach them to the black card base.  I then played with the floss to make my loops and cat toy.  I glued the floss under where the black ribbon was set to go.  Using a lighter, I fixed the ends of the floss and ribbon so they won't unravel.

I carefully glued the ribbon over the floss and then started on my images.  The ball of yarn was stamped in black on pink fluorescent cardstock, and the cat on grey cardstock.  I then coloured the cat with pencil crayons and fussy cut them out.

To give the card a bit of dimension I used a pop dot in the centre of the yarn and cat's face, gluing the rest of the images down.  This way they pop up a bit.  I left the cat's tail unglued.

For the sentiment, I used the 'Purr-fect' stamp from Some Odd Girl's Clever Kitties set (which is where the yarn and cat are from).  'Have a' was carefully inked from a JustRite stamp and 'birthday' is from a There she Goes stamp.  I'd intended to do the entire sentiment in black and at the last moment noticed my pink Hero Arts fluorescent ink, and so used that to give it a bit of umph.
Posted by Jessica Strider at 3:28 PM

What a fun idea! Love the realistic yarn for her to play with! Thanks for joining the SOG challenge!!

that yarn is so fabulous, i love how you incorporated it. fantastic card!!

SO cute! Love the ball of yarn and string. Thanks for playing along with the Anything Goes challenge over at the Simon Says Stamp Challenge Blog this week!

That yarn is genius, and I love love love that it's neon pink! Very creative! Thanks for joining in on the fun at SOG!

This is so cute! I like the extra dimension you add.