Baby, It's Cold Outside

The next card I tried 'ink painting' on was a winter card using two new products, Technique Tuesday's Treemendous stamp and a liquid applique pen (for fake snow). 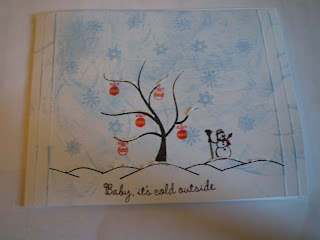 I stamped the ground, the tree, the snowman, bulbs and snowflakes.  Then I used a make-up brush and light blue ink to do the snowy sky.  It's much more splotchy than I would have liked, though it does give a kind of blizzard effect. 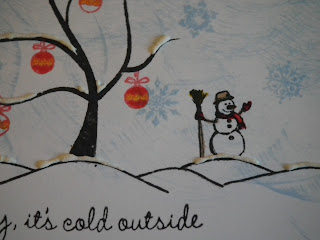 The applique goes on as a thin line.  You're supposed to let it rest for a few hours, after which you use a heat gun on it.  The lines puff up into snow!

Still not the ink painting I was going for, but I was learning things (even if I didn't learn them fast enough to apply them to my next few cards).

Oh, and the score lines on the sides are because I bought a Martha Stewart score pad.  For some reason I kept mistaking where the center score line should be, scoring it wrong and needing to do extra score lines to the sides so it didn't look like a mistake. :)  I did score lines on the right side of this card to give it a sense of symmetry.