I made this card as a submission for Simon Says Stamp's 'Wrap It Up' Challenge.  I patterned it off of this card I found by Donna M on Splitcoast Gallery.

I started out by die cutting and embossing the buck from the Sue Wilson Deer Family die out of a glossy white cardstock.  I die cut a piece of black cardstock to frame it.  Despite the shading in the picture, the card base is white.  I took a piece of Donna K patterned paper for the center panel.  I didn't have any blue paper in the shade I wanted for the borders on the panel, so I coloured some white cardstock with a blue marker.  I glued the two strips on and made indents in the paper where the white thread would go (if I had silver thread I'd have used that instead for this).  I threaded the paper and taped it in place on the back before gluing the panel down.  I used pop dots to attach the deer frame to the card. 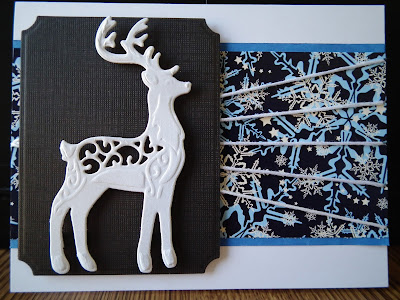 Posted by Jessica Strider at 4:41 PM

BEAUTIFUL textured deer! Love the layering and details! Thanks so much for playing Simon Says Stamp Wednesday “Wrap It Up” Challenge!