Cards of Christmas Past 4

I made a ton of copies of this card as it was pretty much the only one I handed out last year.  I bought this cute stamp set at the spring Creativ Festival and was determined to use it.  The set, called The Holiday Snowglobe Rubber Stamp Set by Plaid, included the snow globe, a snowman, snowcat, snowbunny, snowdog, a tree, Santa and sled and stars.  I made a bunch of different critters in the snowglobe.

The base was done with watercolour crayons as I decided it blended better than my other options.  I used a blue pencil crayon to give the snow in the globe some colour and markers for the inside critter.  The outside trees were inked with markers (so the leaves are green and the trunk brown).  I made a stencil for the Merry Christmas and coloured marker through it.  Then I added a strip of wrapping ribbon on the side.

As a final - and sometimes bad - touch, I sprayed the card with glitter mist.  The first few times I did this I had the nozzle too close to the paper and it caused the ink to run and warped the paper, though it also made the paper sparkly.  I quickly learned to just barely mist the pages so that wouldn't happen. 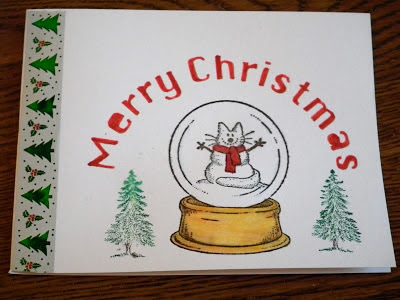 Posted by Jessica Strider at 8:30 AM

I wanted to let you know that you are our random winner on the PaperHaus blog. Please send your shipping information to Chrissy.PaperHaus@gmail.com. Congratulations and thank you for the support!

Great card! I got your cards today. Thankyou!!!! Love the peacock too!

@ Karin - Glad they got there and you like them. Sorry we won't see you before Christmas.

After looking at this card again, you can send it to me next christmas- but put a doggie or 2 in it, retriever or husky :) instead of a kitty. I'm hoping the peacock was a pre-cut thing and you didn't cut it out yourself.

We're going to bruce's work party the same day so we won't be home crying about missing the party. It's actually rather expensive coming down both because of the gas, but also the meals we eat on the road as it's a 5 hr trip. if b and i do it alone, we can bring some snacks but with kd, we usu make a stop or so. It's also always a gamble because of the weather in winter. B says there were a bunch of accidents on the highway yest. as it was turning cold and the road froze.

So we go to the summer party instead. I was hoping to go to the christmas one but c'est la vie. I got really cool new clothes instead :P. India pants and a hot pink bubble shirt. Cant have ocd with baggy pants tho, because they touch all sorts of stuff as they are lots wider than i am! Wouldn't have been able to wear them 4 yrs ago without freaking out. I'll post a pic on facebook.

This is the card I gave everyone last year, so you should have one. Not sure what animal you got though, as I did a bunch of different ones. And yes, the peacock is pre-cut. I'll do a post on it after the holidays.

I'll have to check!