As promised, here's the first post detailing the wedding card I made from my husband's friends.  This is the most complicated card I've ever done.  And I think it turned out very well.

It was a beach wedding, so I googled 'beach wedding cards' to see what other people had done.  There are some fantastic cards out there.  I loved the various sandal cards but I actually did the (much harder) inside first, so the outside had to fit what I'd already made, and that meant a shaped card was out of the question.

Then I spotted a 3 silhouette print by Cherry Graphics called Wedding Favor Clip-art.  It's free to download, so I downloaded the image and then opened it in my Silhouette's Studio program.  I learned a while back how to trace images with the software (from one of their blog tutorials), the problem being that when images (like this one) are small or low resolution, your traced image isn't well defined.  So... I spent several hours making sure the lines were defined and the holes (which didn't show up in my trace) were back and properly defined.  Given how small the cut turned out, I probably needn't have worried about it so much, but it did look fantastic.

I originally made a backing paper for this using a pattern derived from the bridesmaids' dresses (with stripes of white, black, red, purple and light blue) but thought it looked too busy with the silhouette, so just cut it out of black and glued it on the back of the gold paper I used for the inside.  My husband thought the brown looked like sand, which seemed appropriate.

Here's the front of the card: 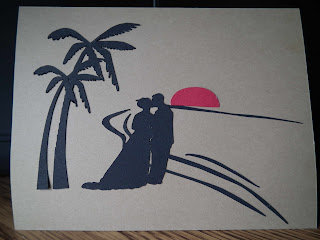 If you look at the original picture, you'll notice that I slanted the couple a bit too much, which is why my horizon is on a slant.  I ended up adding another line there so I had a properly aligned horizon line.  You can also see the little cuts in the palm tree trunks and leaves.  Yeah, that took a LONG TIME.

Tomorrow I'll explain how I did the inside.
Posted by Jessica Strider at 1:10 PM

Sorry ChatterScene, I'm so used to comments with links being spam that I deleted your comments before checking your legitimacy. :( Thanks for visiting and I promise I won't do that again - to you or anyone else.