Part of my quest to learn how to ink paint was figuring out if the sponges I was using (some face make-up sponges I had lying around and sponges that came as filler with a set of hot-fix rhinestones) were appropriate for this type of project. 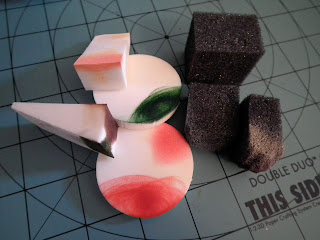 The black filler sponges came square and I tried rounding them so they wouldn't leave streak marks.  After trying - unsuccessfully - to reproduce the ink painting I've seen on other sites I decided to buy actual ink daubers (craft sponges designed for this purpose).  I wanted to see if the daubers were special in some way.  The sponge on the daubers is a cross between the two sponges I was already using.  It's got small pores and is quite soft to the touch as well as having a rounded top. 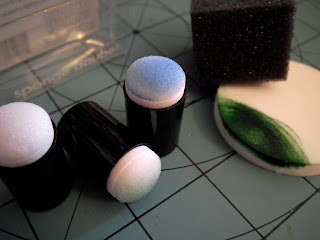 With regards to ink painting however, I had the same problems - streaking and hard edges.  Obviously my problem was not the sponges then (or not just the sponges).  So I tried something else.  I tried not putting as much ink on the sponges.  Voila!  Apparently I was over inking the sponges, making their first contact with paper too ink heavy, so they smeared and left firm lines.

In addition to the over inking, I suspect you're also supposed to leave that first smear on whatever mask you're using with your project (for land/sun/landscape background), then smear a smaller amount from there onto your project.  I'll have to practice with these ideas, but my first attempt with this knowledge turned out quite good.  I'll post that card tomorrow. :)

Posted by Jessica Strider at 12:43 PM

Like sponge painting on a wall. First you sponge on some newspaper so you get the excess off the sponge, then you sponge on the wall!

I hadn't thought of it that way. Yes, it's the same kind of thing. Or... you just don't get as much ink on the sponge to begin with. I haven't had time to experiment with it much lately, I've been working on other things (most notably Christmas cards).