This card was an experiment in a couple of things.  I improved all of them in the second card I did, which I'll post tomorrow. 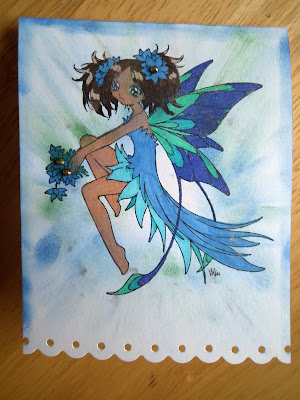 I started the card by 'ink painting' the background.  That meant taking my sponges and making a radiating pattern from the center where I intended to stamp the fairy.  I used blue and green ink, then some gold to give it a bit of sparkle.  The obvious error here is that I inked into the fairy's skin (most notably her face).  I coloured her with markers, used a glitter pen to give her wings some shine, and added a few heat set gems.  To finish, I punched the bottom. 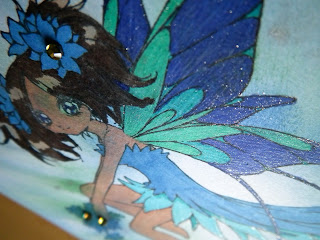 While I wasn't entirely happy with the ink background (it smeared well in some areas and made splotches in others) on the whole I did like the card.