As soon as I saw the Happy Hour digi stamp at Kenny K's downloads I had the idea for this card.  It didn't work perfectly in execution, mainly because it was my first attempt at several things.  Despite the mistakes, I'm submitting this to the Kenny K It's One For the Girls challenge.

So, this is the first time I tried making a 'flip-its' card.  I don't have the Sizzix dies that would make this easy (and perfect) so I scored the fold lines on my cardstock and used a spellbinders circle die to cut out the circle (carefully placing the edge of the cutting plates along the fold lines so the circle would remain attached to the paper).  My two errors here were in making my fold lines too close together (the card is quite wide the way I've done it since it doesn't fold along the center line when 'closed') and not putting the die in the center of the flip (hence the gap between the circle and edge when the card is closed).

I printed my digi stamp and cut out the circle, doing the same for the My Favorite Things stamp on the back.  I coloured in the images and decided, instead of inking the outside of the circles, I'd try something I've seen on other blogs.  I decided to ink close to the imaged.  Well, not ink exactly, since I knew that wouldn't go well for me.  So I took my purple metallic gelato and drew a line around the images.  I then used water to soften the line and spread the colour.  Yeah, that didn't work so well.  In my defense, I have watercolour crayons that wouldn't have left a line, and I didn't think to check the test flowers I did a while back.  Anyway, that line wasn't intentional and I won't do that again.  Though, it does look like the woman on the front has a halo, while the one on the back has an emphasized drunk feel to it.

For a bit of extra dimension I used glossy accents on the glasses (both front and back).  I tape gunned the circles onto the card and took some time to decide my sentiment.  I ended up making one in Apple Chancery font on my computer and printing it on white cardstock.  I used a Spellbinders die to cut them out, 'inking' the edges with a watercolour brush and the purple gelato (I ran the wet brush over the gelato to get colour and then painted the outline).

Before gluing the sentiments on, I took purple ink and balloons from a There She Goes stamp set, and added some images to the back panel so it wouldn't look so plain. 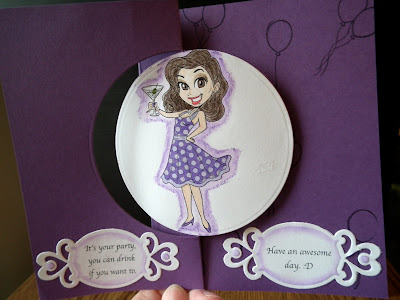 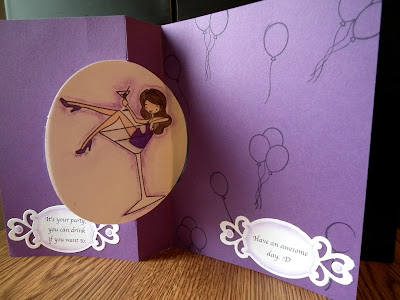 Posted by Jessica Strider at 2:54 PM

Beautiful card. Thanks for playing with us ob Kenny K's Krafty Krew this week.

Thanks for joining us this week at Kenny K's Krafty Krew's "One for the Girls" challenge. Good luck and hope you join us again soon.