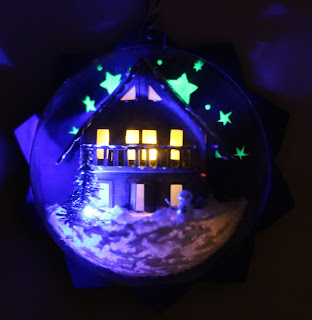 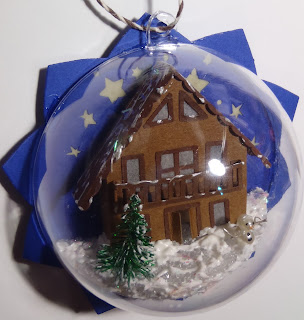 This was supposed to be an ordinary Christmas tree ornament, but some LED supplies I ordered off of ebay arrived, so I turned it into a light up ornament instead. It took a while to do, both because some of the steps required drying time, but also because I had to carefully consider how to make the lights work.

Where did I get the idea for lit crafts? I've been seeing Chibitronics cards all over and I've also discovered mini dollhouse kits that light up. My husband's an engineer and suggested I get LED components if I wanted to try making some of these, rather than buying pre-strung lights or expensive kits. I don't think I can do cards with my supplies - the lights I bought are a little too large - but I can do ornaments and fairy gardens and whatnot.

It was pretty complicated, especially since I put the back on my chalet before I decided to do the electronics, then needed to cut into it to hide most of the wires. There are three lights: two yellow ones in the house, and a blue one behind the tree.

Backing: One piece of blue cardstock die cut, glued to a round piece of stiff cardboard (not the stuff boxes are made of, more like a heavy cardstock). I punched and cut some stars out of the blue with a knife. The inside of the cardboard was painted with 3 layers of glow in the dark paint, to glow as stars. The back was painted black and then sprayed with varnish so the paint wouldn't chip.

Diorama: The chalet started out as a 3D bird house cut file from the Silhouette store. I modified it, adding windows, frames, an open door, and the balcony. There's a thin layer of German lantern paper covering the windows (it's kind of a cross between waxed paper and tissue paper - I know about it because my parents brought it home from Germany when I was a kid. I bought some on a trip there a few years ago. The point of the paper is to help diffuse the light so there's no blindingly bright spot. Tracing paper, crepe paper, tissue paper, etc. would probably work too).

The tree is from a shaped pipe cleaner, cut and dabbed with some white puff paint and glitter glue. Here's the tutorial that taught me how to make them.

Base: This is a quarter of an 8cm styrofoam ball. I thought the styrofoam looked kind of ice like, so I just I added some white puffy paint in places to look like snow and sprinkled some iridescent glitter on top. I did a failed version of the base where I covered it in a thick layer of white glue and added the glitter, but it wasn't the right size so I had to redo it. I also didn't like that the glue dried clear and flat, removing the texture and interest. I didn't realize this when I set it up, but the blue light diffuses through the styrofoam - but not the paint - giving a cool effect. 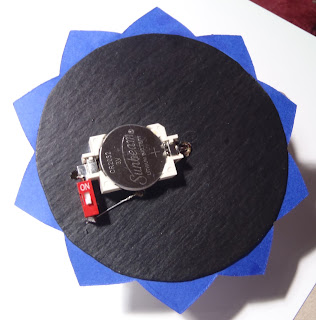 Electronics: The two lights in the house were attached to a piece of cardboard. Each led had 2 prongs, a positive and a negative. I twisted 470 ohm resisters to the negative sides before joining their wires up (behind the resisters). They come out at the bottom of the house. The positive sides were twisted and join at the middle of the house. For the tree light, I made a hole through the styrofoam for the negative wire and ran the positive one on the surface (covered by puffy paint). They join up with the wires behind the house. I punched two holes in the backing for the wires to go through. I glued a battery holder down using crazy glued, and an on/off switch with hot glue (it had a depression in the back so there was nowhere for the crazy glue to stick). I lined up the wires and my husband soldered the wires together.

I finished it off by gluing the dome on with some hot glue (alas, I made a bit of a mess with the glue in one area, so I'm trying to come up with a better way of attaching the dome for the future).
Posted by Jessica Strider at 12:49 PM

So clever and cute! I love it!