One of my acquaintances is a huge Powerpuff Girls fan, so I made them a custom designed card for their birthday.  I used images from the internet as a template and then drew the three protagonists.  I traced the drawings onto cardstock and inked them with a black marker, then coloured them in.  I glued small triangular strips of coloured vellum to the girls, attaching the points to the white base, as colour streams.  For the background I used a Crayola airbrush - which turned out a bit more splotchy on the pink than I'd intended, but overall I liked it.  I glued the white base piece to the sprayed cardstock, and used pop dots on the girls so they'd stick out a little. 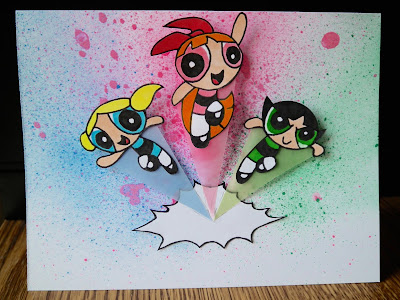 Inside, I drew an image of one of the show's bad guys, Him. I should have used the Powerpuff Girl font for the message text, but I didn't think of that in time. 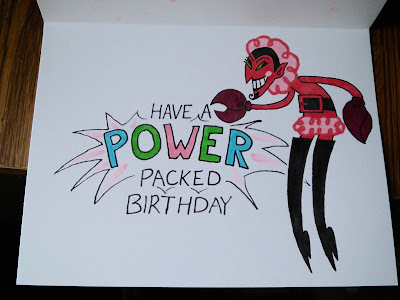 This card is amazing! I love the powerpuff girls! You did a great job!

Amazing card! Love the vellum layer and the spatters :) Thanks for playing along Simon Says Stamp Anything Goes Challenge
Gayatri xx