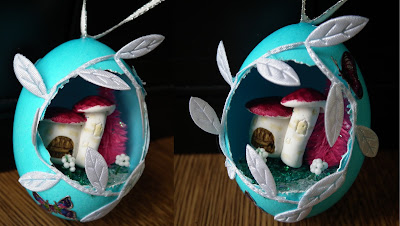 To finish off the egg, I wrapped some vine ribbon around the opening, then added a thin ribbon to hang it from.  I also added some butterfly stickers around the shell so it wouldn't look too plain from the back.
Posted by Jessica Strider at 3:26 PM

I really love this! It could be an Easter tradition to make one every year.