Sorry for the lack of posts lately.  Last week I had to catch up on some reading for my other blog and this week I wasn't feeling well.  That passed yesterday and I managed to do some card crafting again, so I'll have some new cards up for you next week.

Today I've got my entry for Kenny K's Steampunk challenge and Simon Says Stamp's Wednesday "Anything Goes" challenge.  I've missed working with the awesome Kenny K digis.  Today I used Brianna Blaster for my card.  I printed her out and cut her outline using my Silhouette SD (one reason I haven't used digis for a bit is because my cutting mat needed replacing and I dithered over it as the SD has been discontinued, so I needed to find an alternate.  More on that next week).

I started with a red layer meant to back Brianna.  I have a doily stamp that looks like wrought iron, so I inked that a few times in black.  I then cut a similar sized black piece of cardstock to put underneath and stamped some gears on it in versa mark ink.  I then embossed those with red glitter embossing powder (much of which later wiped off, but it still looks cool).  I ended up switching the layers around to show more of the embossing.

The third layer is black magic cardstock from Core-dinations.  It's black on top and white underneath.  I cut the piece and then ripped the edges.  I embossed it with a steampunk plate and then sanded some of the raised bits.  The cardback is black cardstock.

For the embellishments I used some silver and grey gears I cut out the last time I did a steampunk card, glued on between the layers.  The 3D gear is from one of my tape runners painted with metallic nail polish.  I had to cut out the centre part as it stuck out too much, so I glued a gear brad to cover the hole. The colour of the brad was too dull for the card so I painted it with silver nail polish.

Finally Brianna.  I coloured her with pencil crayons, adding a silver pencil crayon for the hair, eyes and parts of her gun and outfit.  I also used black and silver glitter pens for the detail work and a red glitter pen for the gauzy cape she's wearing.  There's a touch of glossy accents on her goggles.

The layers are all taped on with Brianna added with pop-dots at the end.  It's one of the busiest cards I've made, but I rather like it. 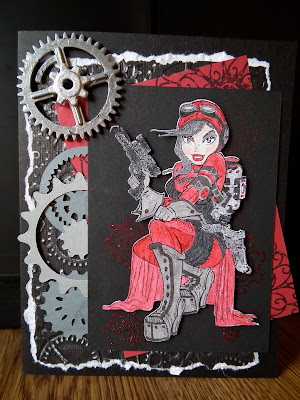 Posted by Jessica Strider at 5:04 PM

Oh this is fabulous.

Thank you for joining us at Simon Says Stamp Wednesday challenge.